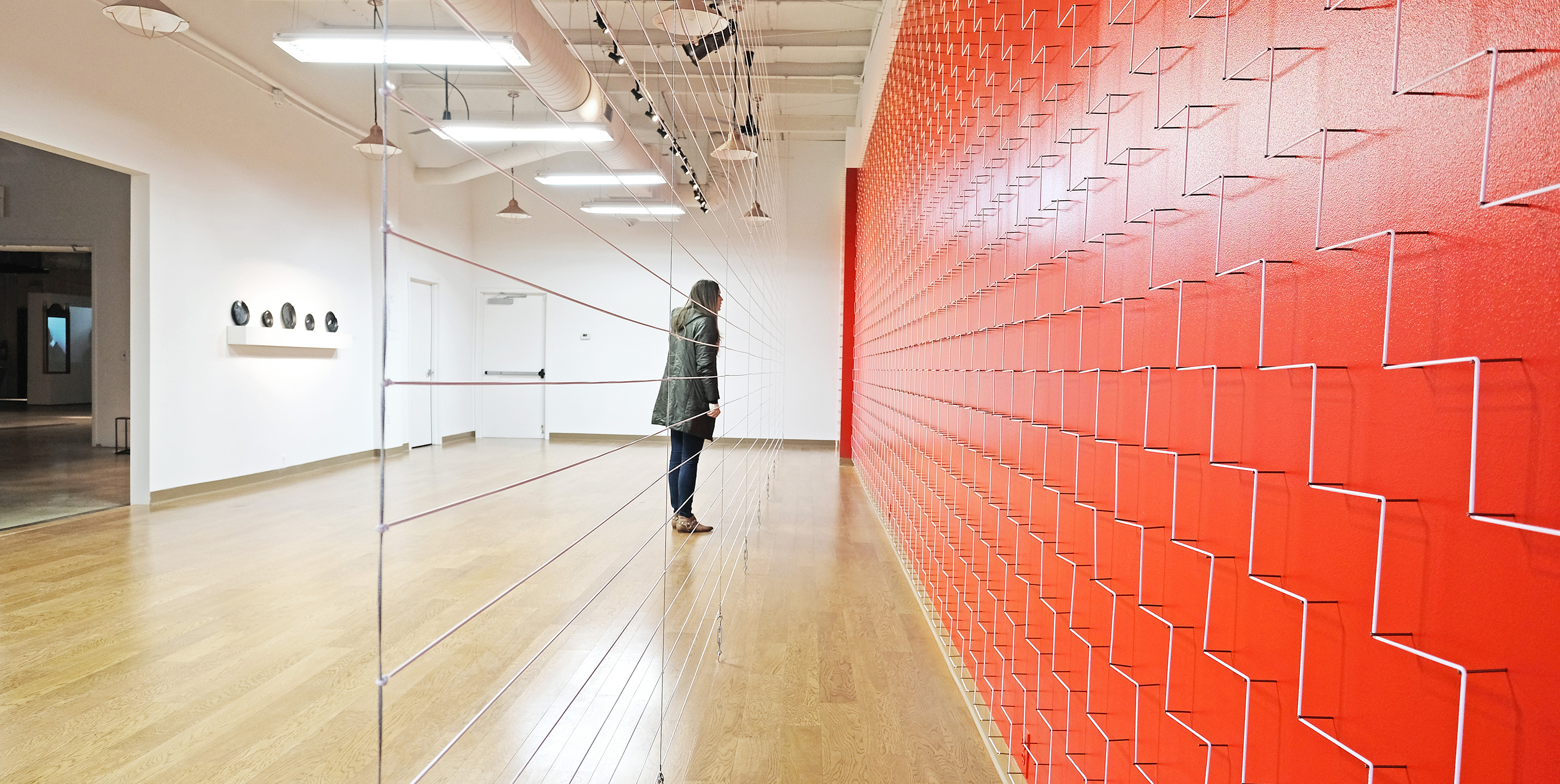 I have held many jobs in my life, from waitress and chambermaid to Hollywood executive, from journalist and editor to aspiring novelist to board member of an organic meat company. I did all these things with curiosity and devotion, but I always had a nagging feeling that I had accidentally awakened in someone else’s life. And as I drove to the restaurant, studio, magazine, or board meeting, when I passed an empty building, perhaps a little shabby and abandoned, I always slowed down and twisted my neck to see—how big is that building? Could I afford to buy it? And for many decades the answer was no.

What I was building in my imagination was a communal place, a home for art and ingenuity, much like the one I grew up in Chicago, where my parents ran an art center out of a former dairy processing factory. There were twenty-five rabbit-warren studios which my father built by hand, and two galleries which my mother curated, and a bronze foundry, and a ceramics studio with kilns, and a dance studio upstairs.  People were always coming and going, and they were Damon Runyon characters, a little scary and delightful, who perhaps at times had consumed a little too much alcohol.

As I grew older and married and had three daughters I felt the currents of my life always carrying me further and further away from this ideal.  My husband founded a wonderful business which after many years of struggle afforded us a rambling house in the country at the end of a long driveway, and after the children were older I sat alone at a desk surrounded by dairy cows wishing that I could think of an excuse to build a small obelisk with strangers, or ring my neighbors’ doorbells in order to read them a poem. 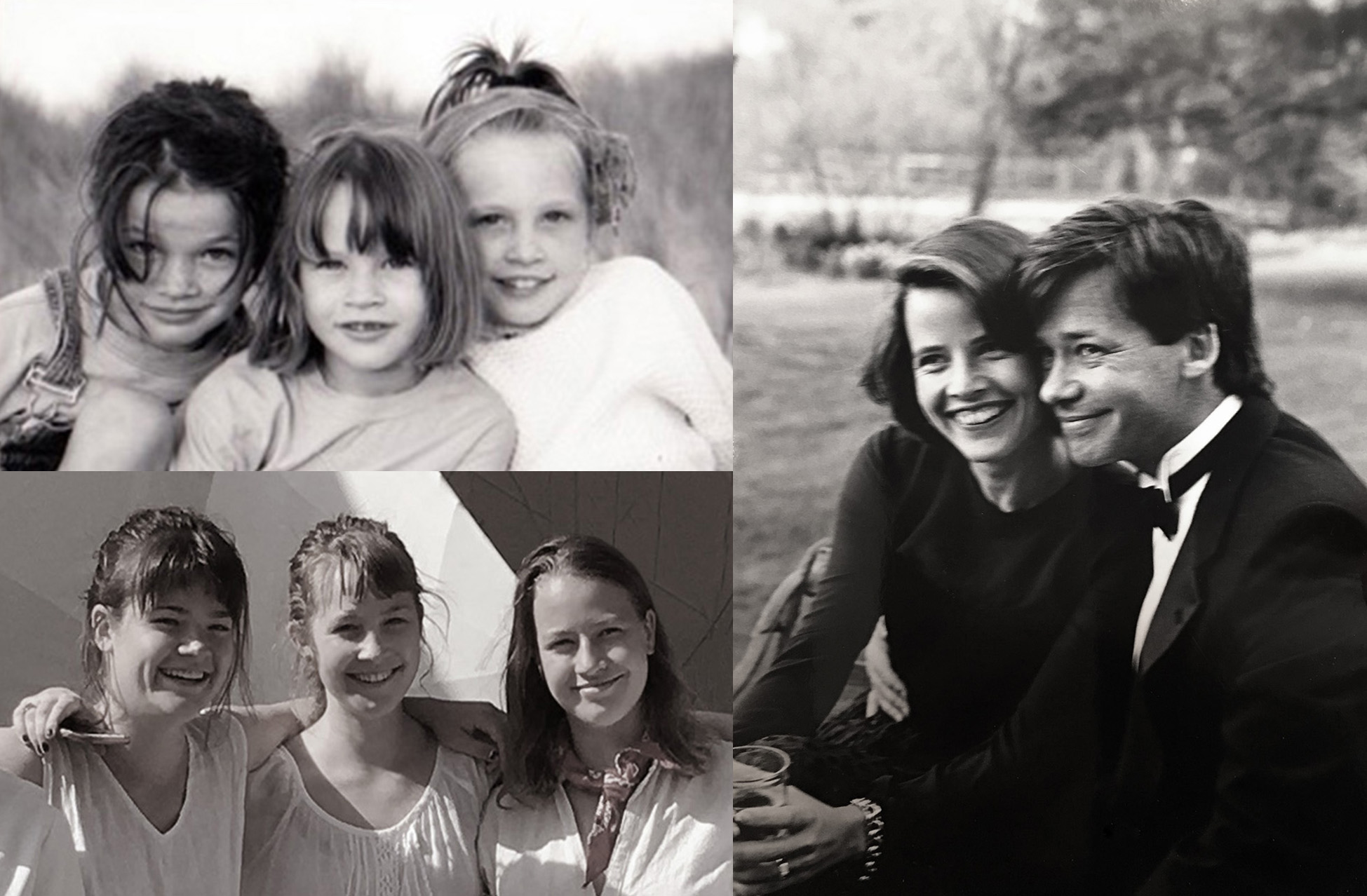 And during these years technology continued making it easier and easier to spend an entire day moving only my four hunt-and-peck fingers on a keyboard, so that when I stood up I was dizzy and could barely remember how to walk. When I stepped outside and smelled the crisp air or the decaying leaves I was reminded that life is short and my heart was still thumping, and I returned to my dream of creating my own communal enterprise involving collaboration, ingenuity, and art. 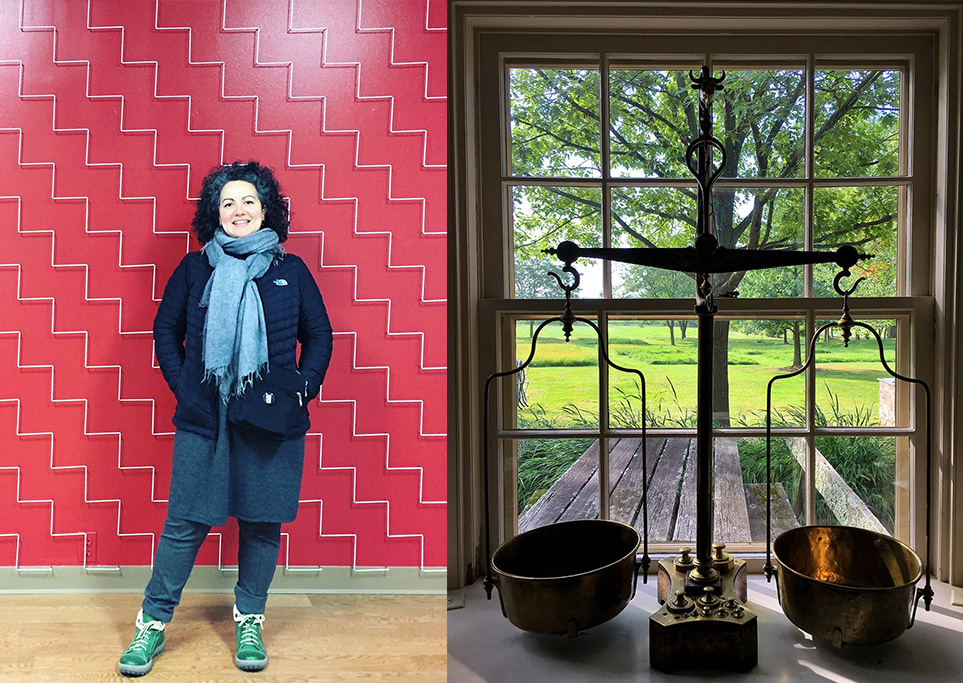 Around this time my friend, the Cuban artist Elsa Mora called me and said,“I have a dream that we might start an art center together.”

I remember exactly the intersection, and the color of the socks I was wearing and the slant of light in the trees.  I recognized these words as though I had been stalled at the stop sign for decades drumming my fingers, waiting for that precise sentence to circle the planet and land in my car.

That was the inaugural minute. As long as I had considered embarking on this solo effort, I didn’t realize until that moment that the whole point was not to do it alone. As Robert Putnam argues in his wonderful Bowling Alone, the world has become a land of lonely silos. The point was that the creative enterprise I was yearning for could not be the work of one imagination.

There were other key players who led to the creation of ArtYard. First, of course, my husband Stephen who agreed to embark on another entrepreneurial family adventure, and also our remarkable Managing Director Geraldine Dougherty, whose encouragement, guidance, and good sense gave me the courage to begin framing the idea.

We formed a 501 C3, and we purchased three buildings along the rail trail at the river’s edge in the unwrecked town of Frenchtown, New Jersey. One of the buildings was a derelict former egg hatchery, where newly hatched chicks were once loaded onto rail cars and shipped out. We purchased a former electronics warehouse; an unremarkable tin can made remarkable by  a chef named Julie Klein who had created  a  vibrant local restaurant, the Lovin’ Oven,  and we begged her to stay. Another structure was the one-time home of the headstone carver for the Frenchtown cemetery, a long meandering graveyard perched between two creeks.  The carver’s home will be the future home of an artists residency overlooking the river and creeks, its wide yard bordered by water on three sides. 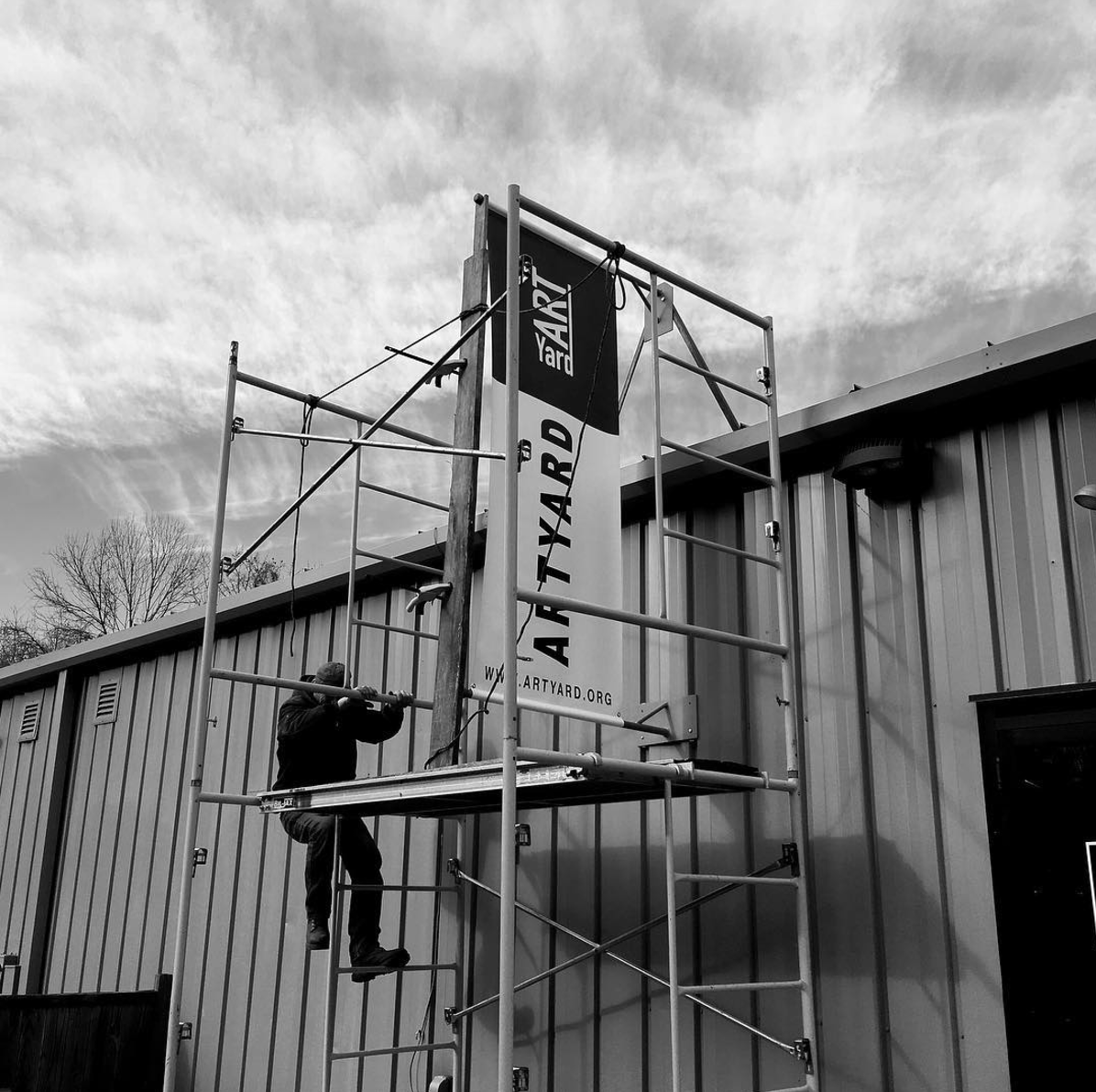 Our building at 62A Trenton Ave. is the former home of Two Buttons,
the beloved gallery of Asian art operated here for eleven years by the
author Liz Gilbert and Jose Nunez. In this picture, you can see Bill Short
installing the ArtYard banner in front of that building.

We named ourselves ArtYard.  We wanted to be an ordinary public place, a yard in lieu of a museum where art is invented, ideas exchanged, relationships forged. We wanted to demystify art, to invite different communities to collaborate, and we committed ourselves to the notion that creative collaboration is a critical component of civic life.

We believe that towns like New Orleans which bake into their geography a system of communal building and celebrating create resilience, mutual understanding, and joy in heartbreaking times, a second line dance at a funeral being a prime example. If we do not create these experiences ourselves playing our own instruments and using our own hands and whatever tools we have, old house paint, cardboard or rubber bands, we cede the experience of living to the professionals. No one is more qualified to make art than anyone else.

We launched ourselves at River Fest, an annual Frenchtown celebration, this year focusing on local birds. With the help of 80 members of the community, we built a 14-foot-tall egg and hatched a parade of 28 giant bird puppets out of the loading dock of the Hatchery (see the video on the left). The birds followed Lee Odom, a jazz saxophone player, down the rail trail to inaugurate the gallery and temporary screening room in the old electronics warehouse at 62A Trenton Ave. Elsa and I installed a collaborative exhibition about the moment that several hundred starlings died in mid-flight over my lawn. With the help of Chris Langhart, once the technical director of Woodstock and the Filmore East, we constructed a temporary theater and screened a documentary called The Wild Parrots of Telegraph Hill.

Our plan is just taking shape and will be refined as we go. Initially, we are focusing on the design and construction of the theater and art galleries with architects William Welch and Edward Robinson. We will be holding occasional film, music, poetry, art and collaborative events in the interim.

My old friend Bill Horberg, producer of Milk, The Kite Runner and Cold Mountain will be curating the film program and inviting filmmakers to Frenchtown to screen and talk about their films. Stephanie Smith, a poetry lover and long time Frenchtown native will curate a poetry series.

Magda Gonzales-Mora, a founder of the Wifredo Lam Contemporary Art Center in Havana, Cuba, and a member of the curatorial team for seven editions of the Havana Biennale, will curate four shows in our galleries, inviting international artists to visit, exhibit and connect.

Elsa and I will develop workshops and intermittent installations engaging artists closer to home. The rest will unfold as the spaces take shape.   Our gallery is now open Wednesday to Sunday from 11:00 AM to 5:00 PM.

We all inhabit the same mysterious, confounding terrain between hatching and burying. Art is an essential tool for making sense of this or mourning the absence of sense. It is a compass, a spade, a magnifying glass. When art is really good, I find, I imagine for a moment that I have made that artists’ thing, or written that writer’s poem, not because I am a thief or plagiarist but because I recognize myself in the other, and I forget for a moment my separateness. This experience is one of life’s most delicious pleasures and consolations.