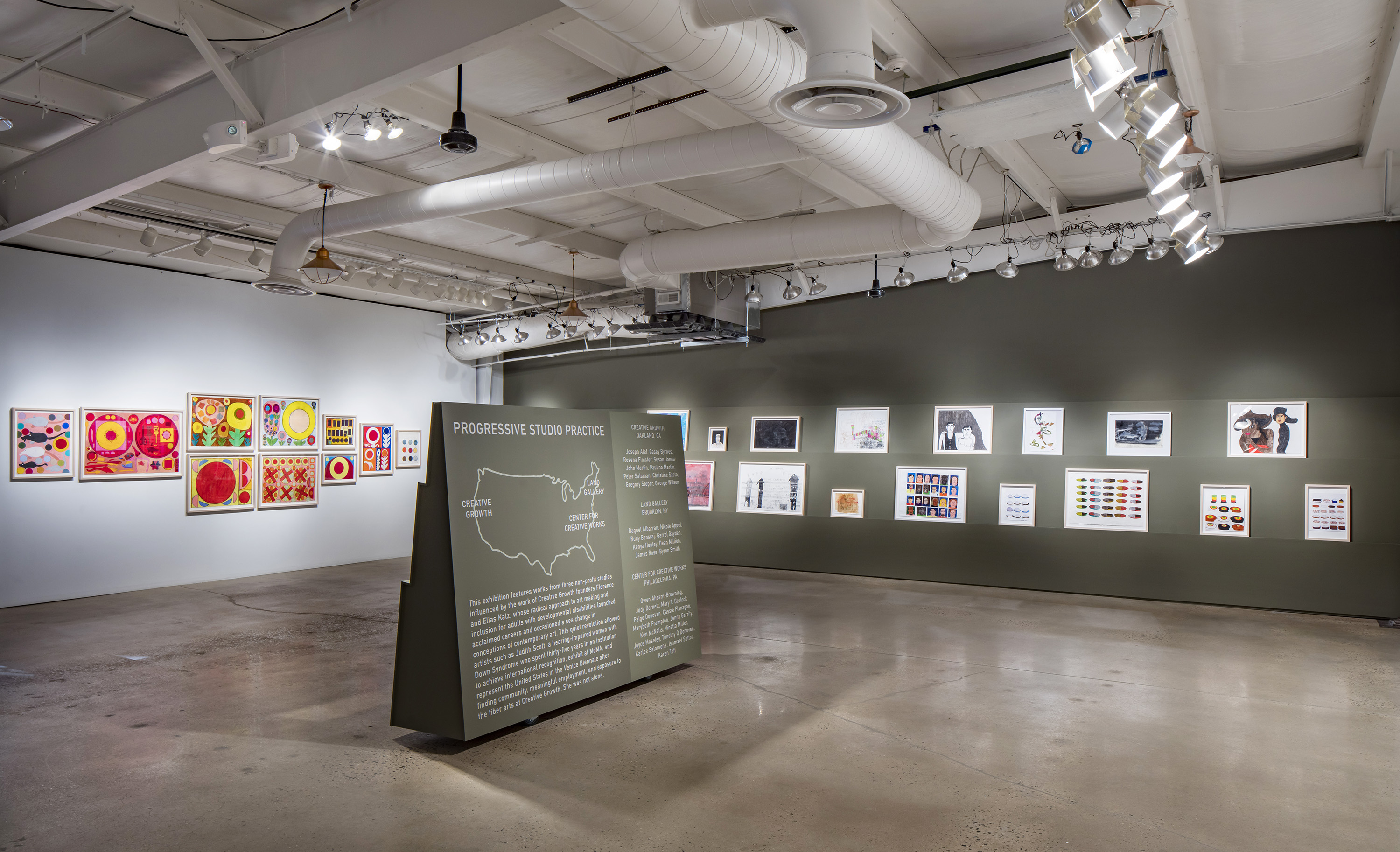 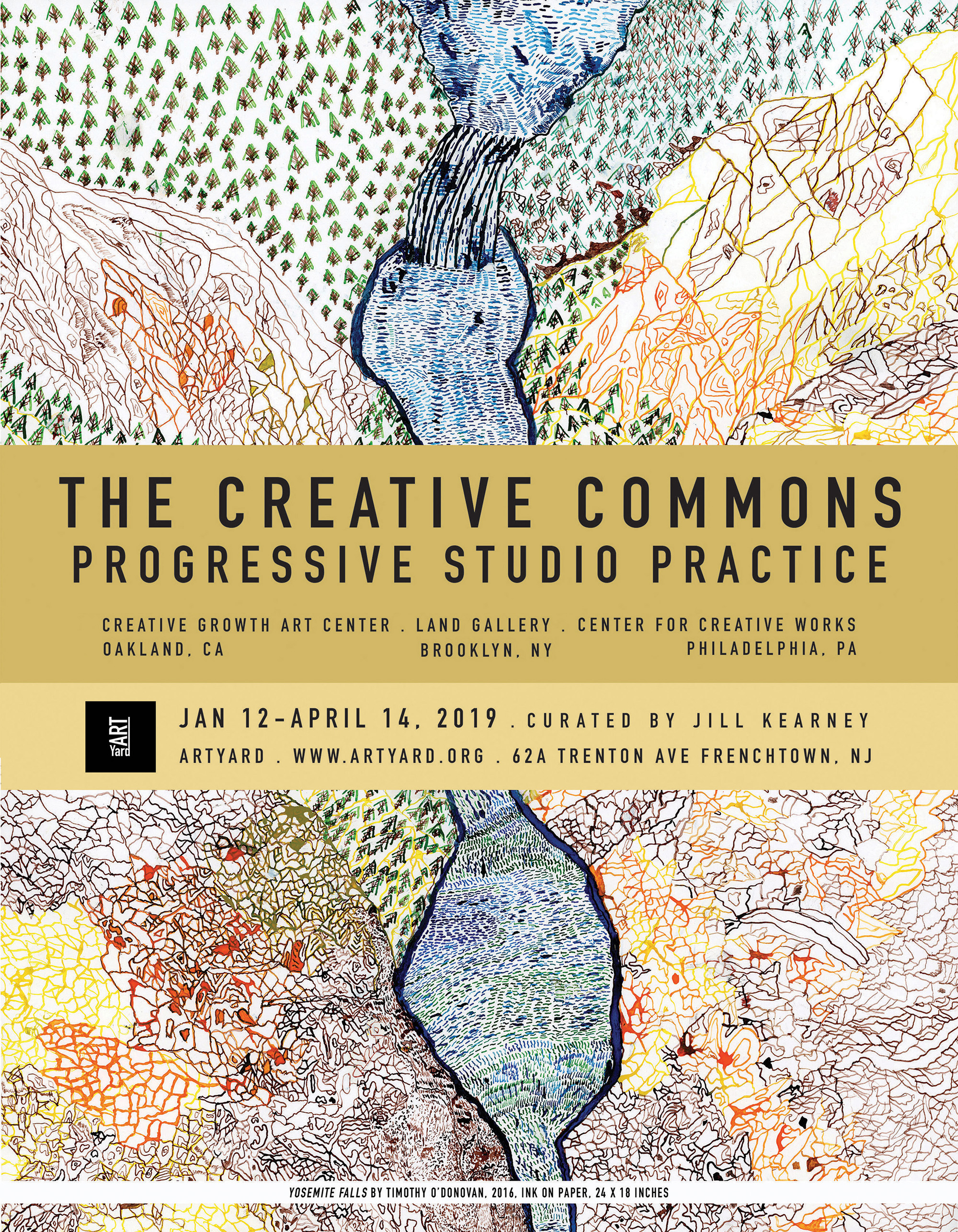 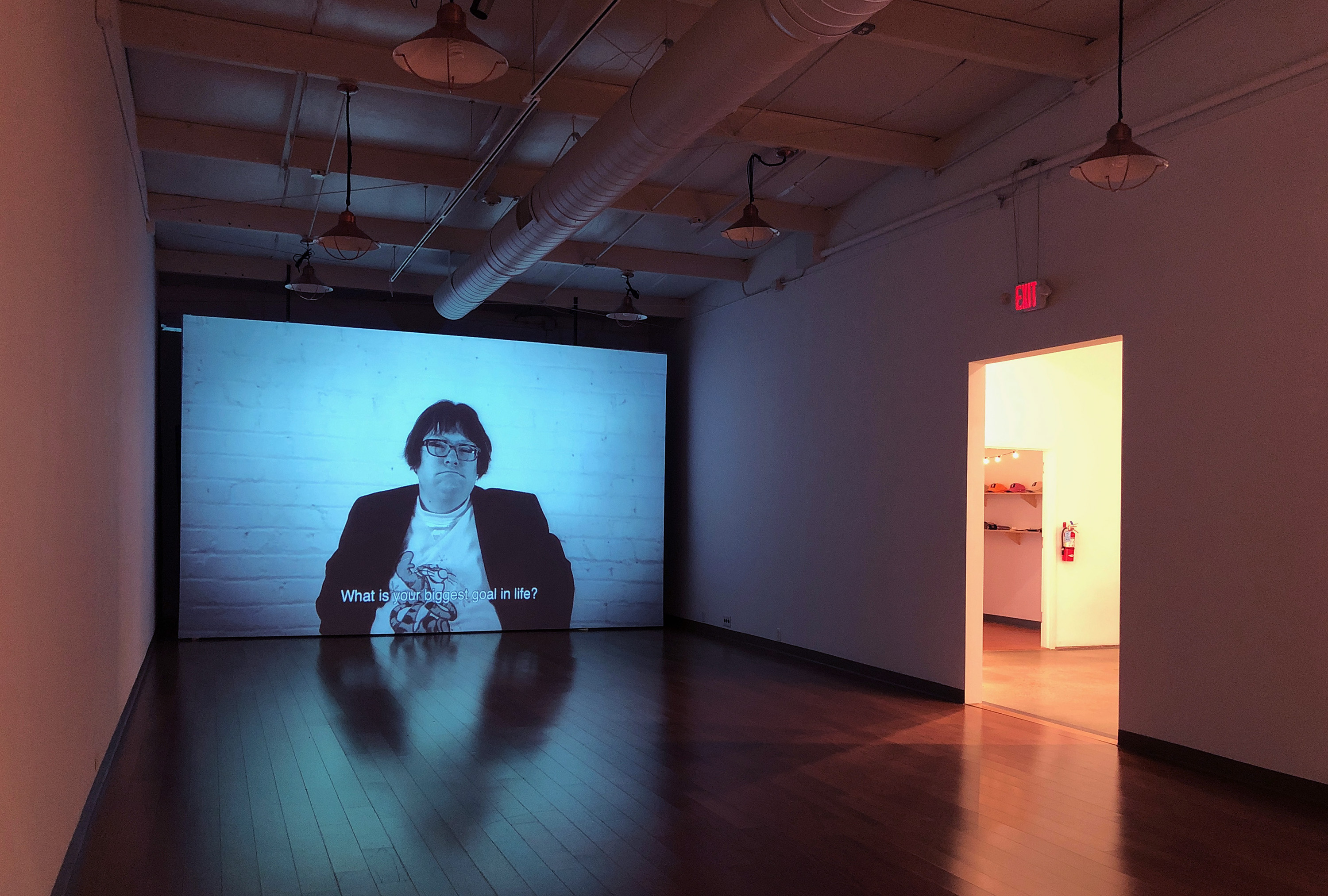 ArtYard is pleased to present The Creative Commons: Progressive Studio Practice from the Creative Growth Art Center, LAND Gallery, and the Center for Creative Works. This exhibition features works from three non-profit studios influenced by the work of Creative Growth founders Florence and Elias Katz, whose radical approach to art making and inclusion for adults with developmental disabilities launched acclaimed careers and occasioned a sea change in conceptions of contemporary art. This quiet revolution allowed artists such as Judith Scott, a hearing-impaired woman with Down Syndrome who spent thirty-five years in an institution, to achieve international recognition, exhibit at MoMA, and represent the United States in the Venice Biennale after finding community, meaningful employment, and exposure to the fiber arts at Creative Growth. She was not alone. 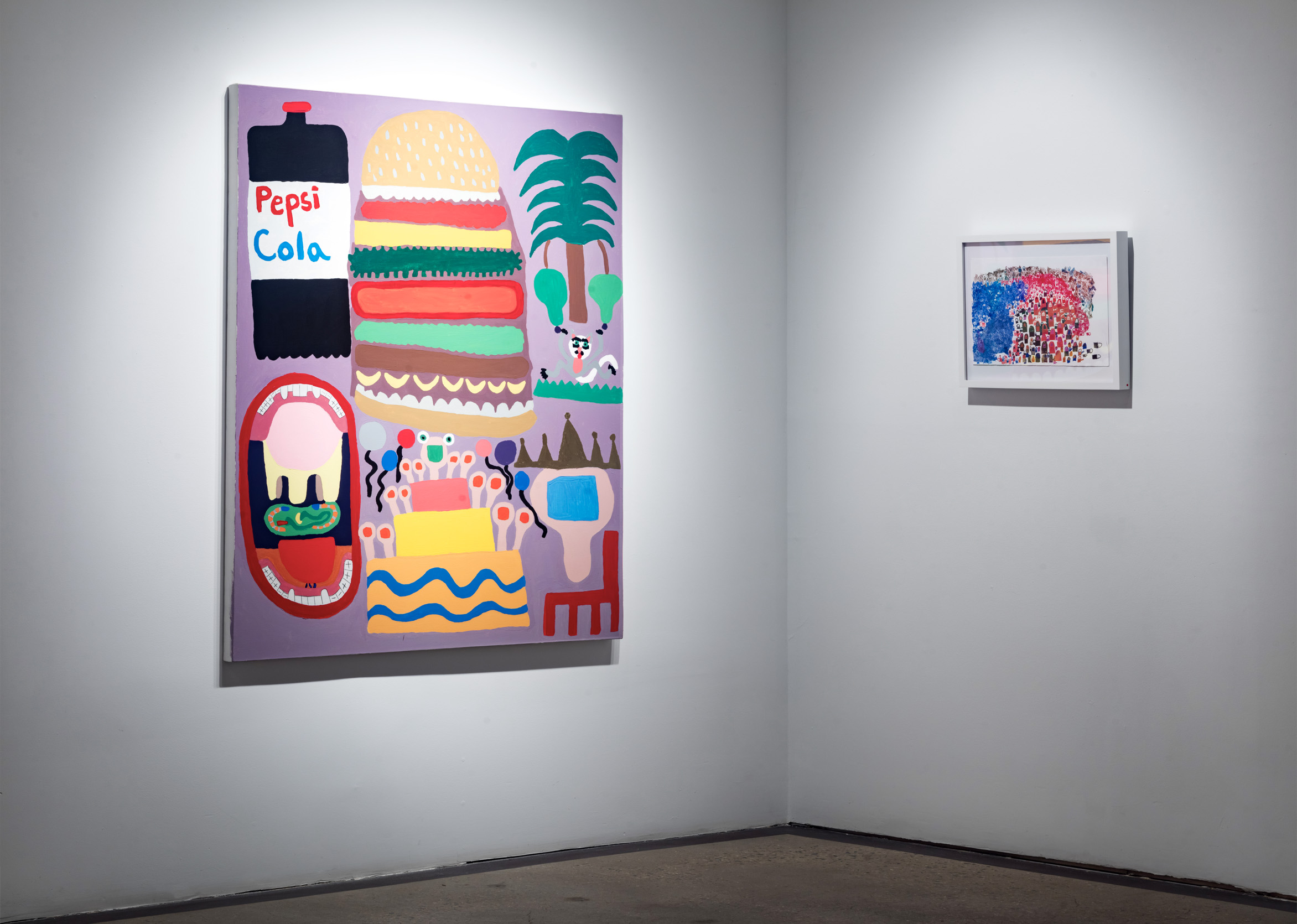 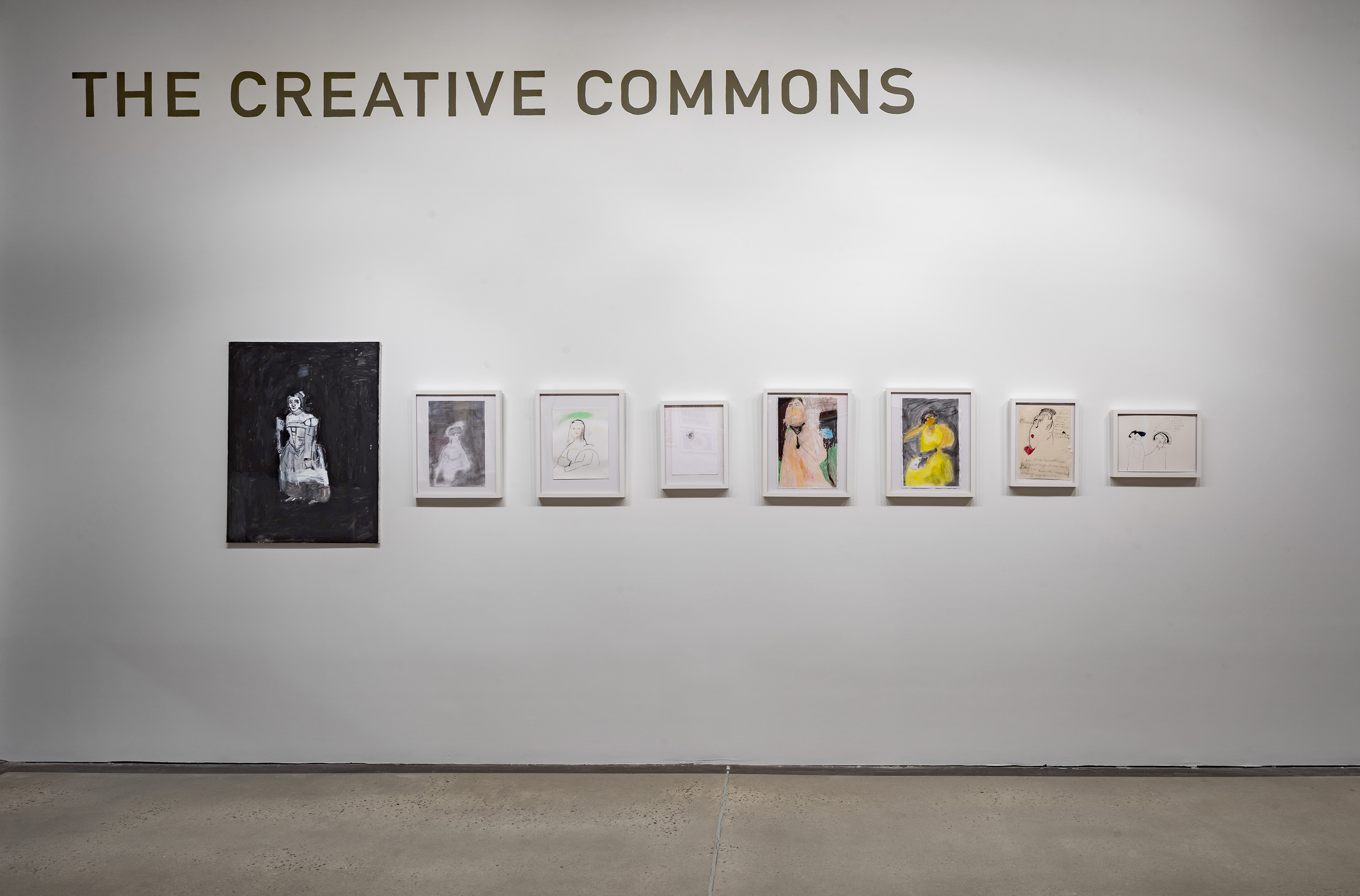 “I started to become intrigued by the question of why was there so much wonderful work coming out of these … art centers and was there something they had in common, some kind of methodology … which had to do with giving adult artists with developmental disabilities an opportunity to work in communal studios at hours which reflected the common work hours, … that these centers be connected to the art world, that there be a gallery connected to the studio, that there be not teachers but facilitators who would assist the artists in making their work, and that there would be a sales element. It’s interesting that the first of these centers was created at exactly the same moment of Roger Cardinal’s famous Outsider Art definition of outsider artists being cut off from the world. These centers were radically connected to the world.” — Lawrence Rinder, Director of the Berkeley Art Museum and Pacific Film Archive 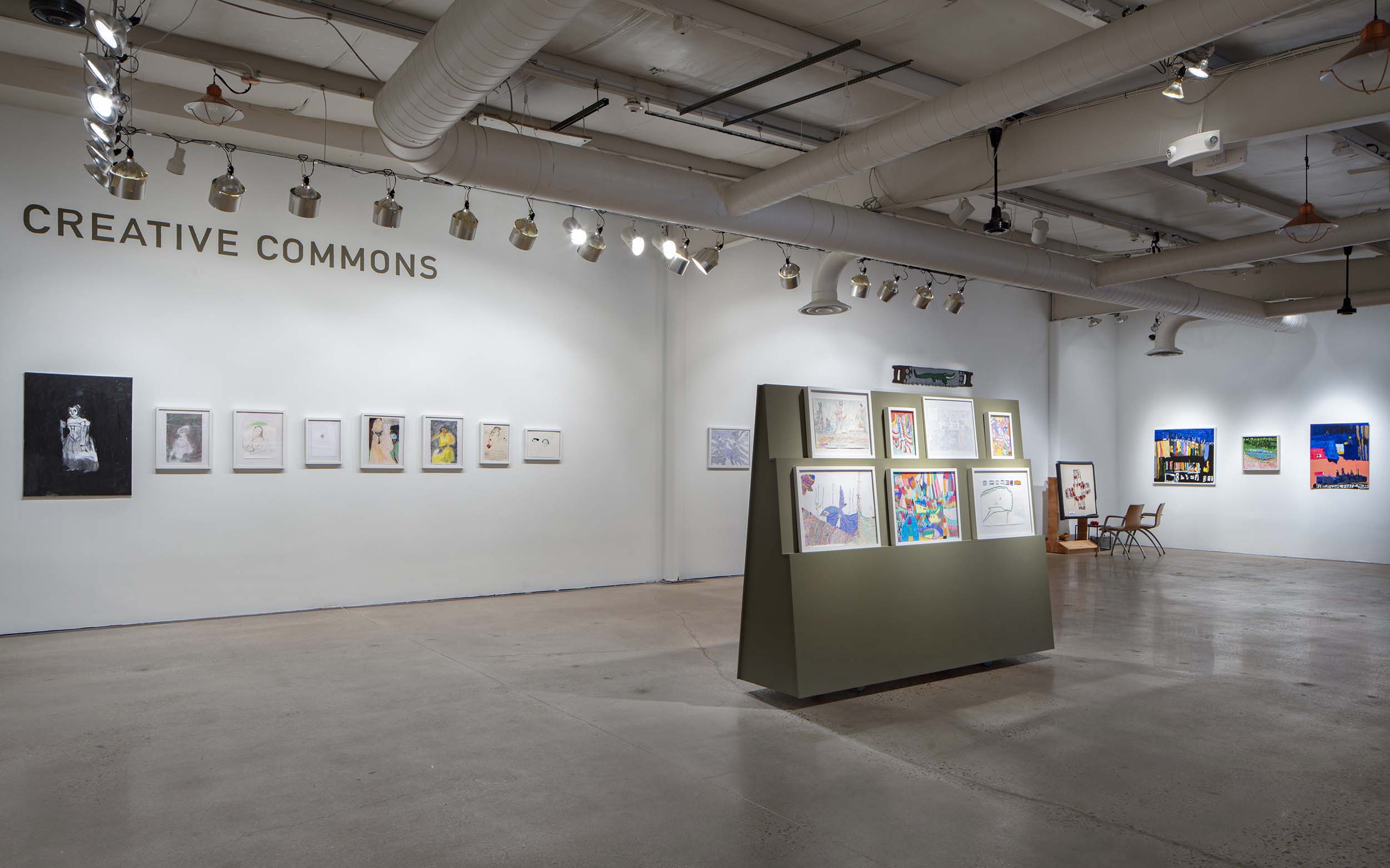 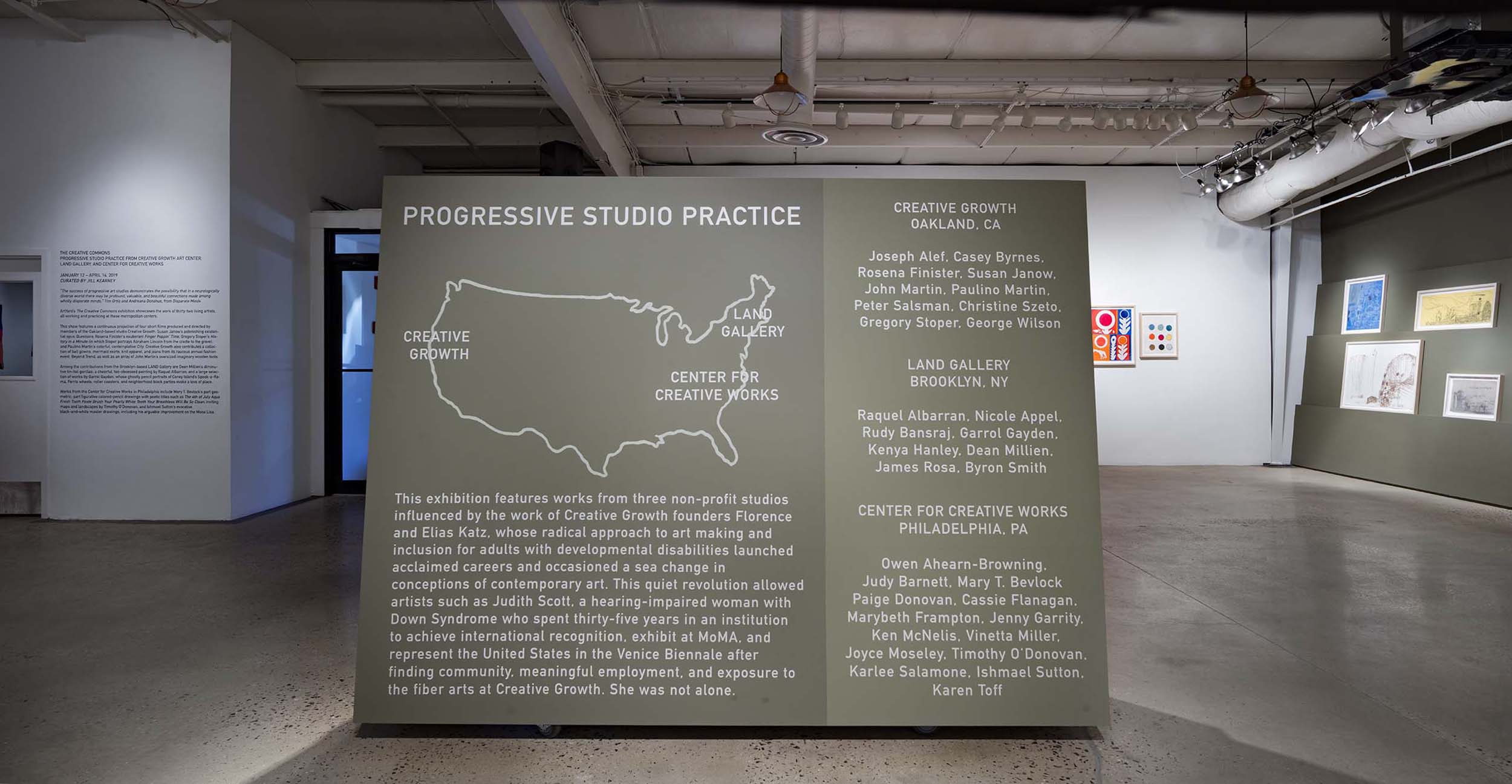 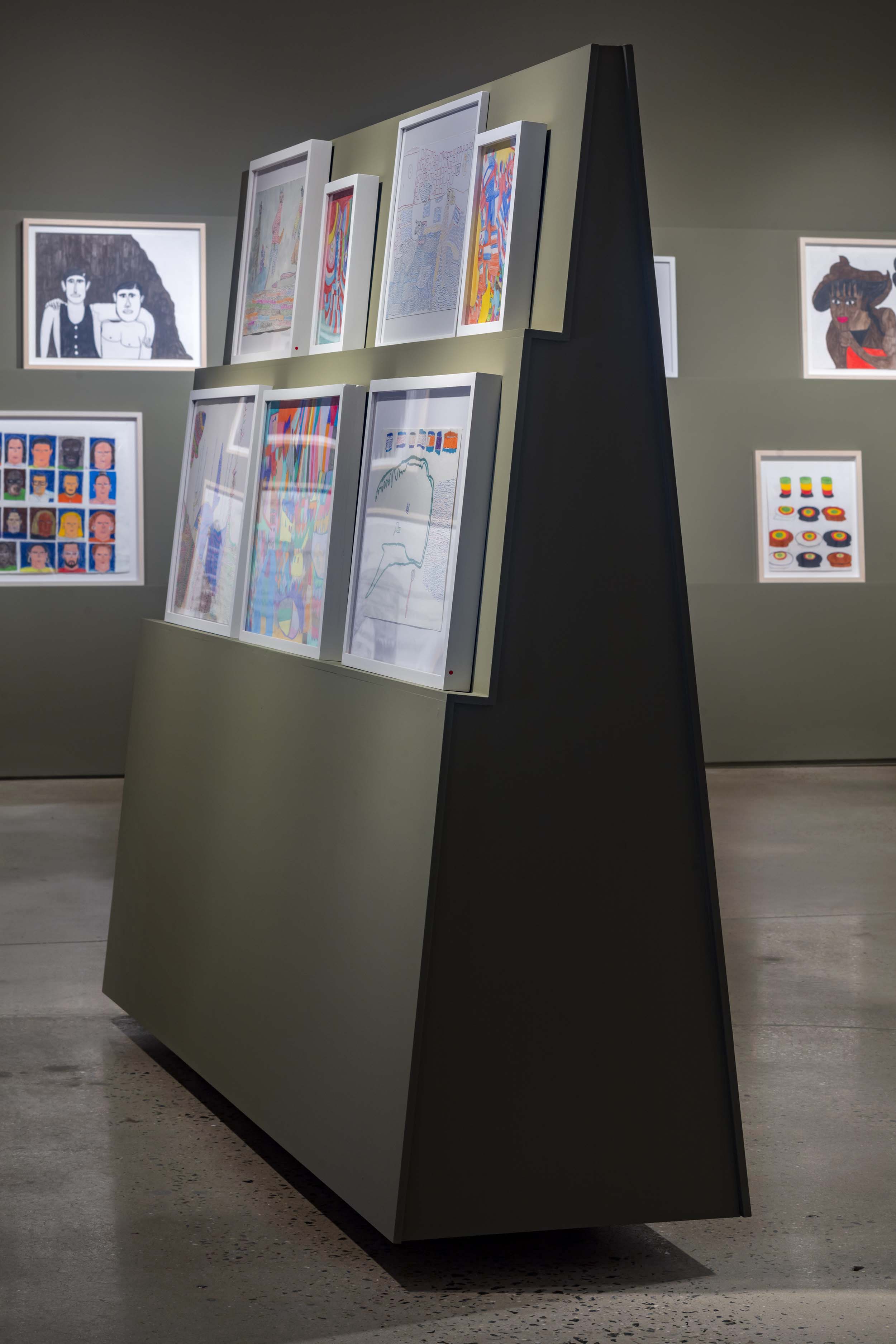 Importantly, these programs provide not only community, studio space, encouragement, and exposure to new materials, but also a source of income for marginalized and stigmatized individuals who often struggled to find meaningful employment. 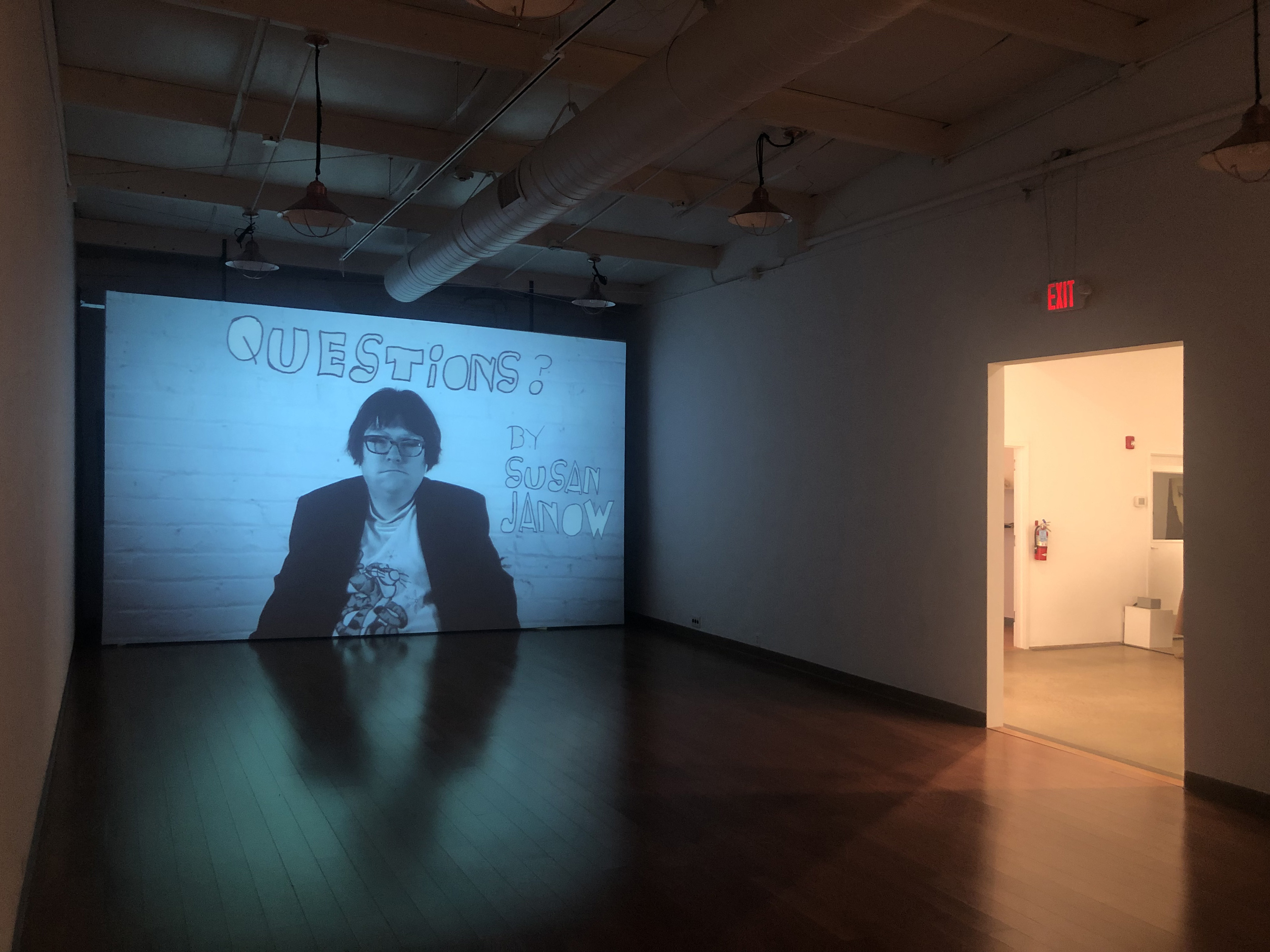 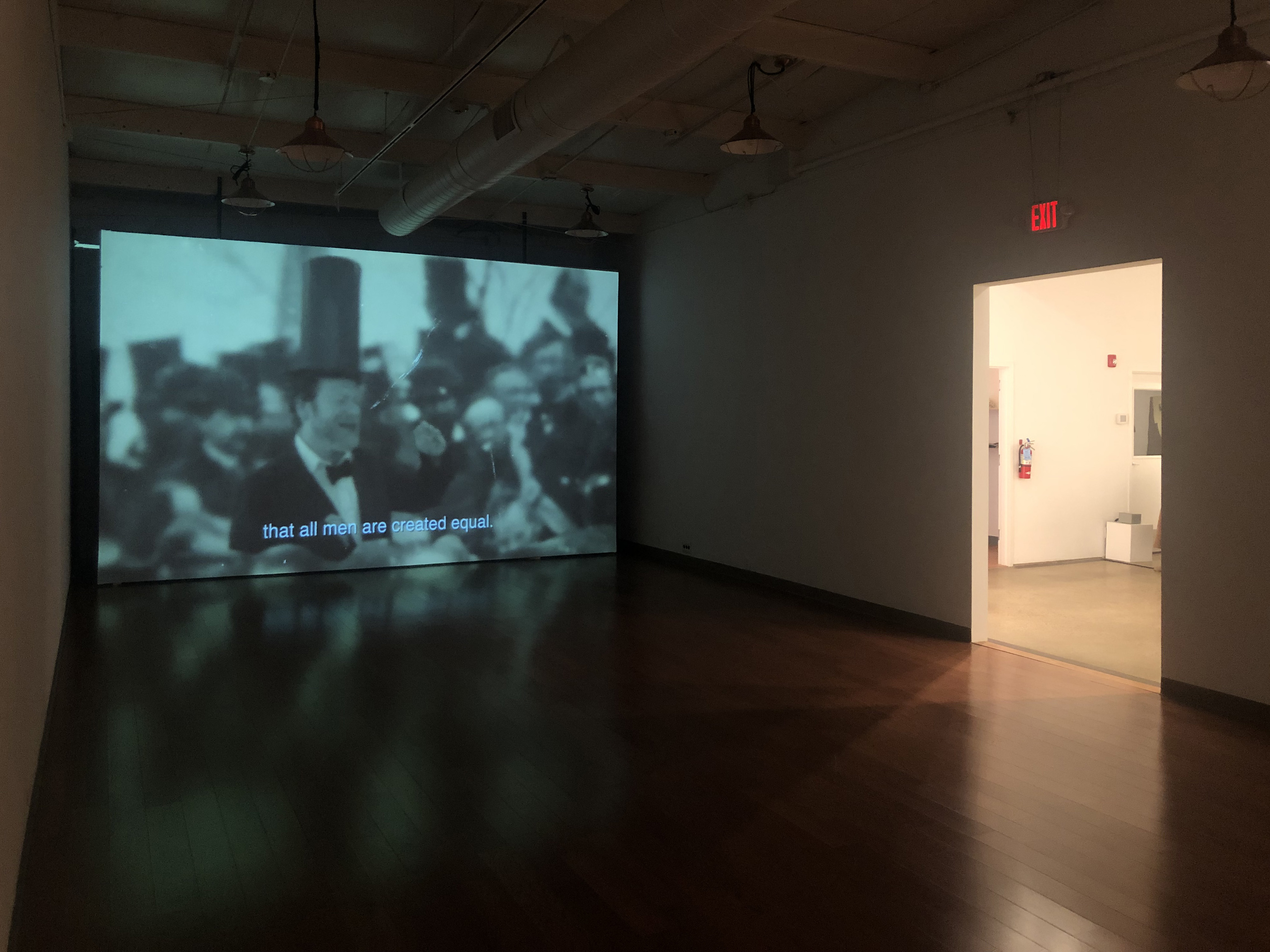 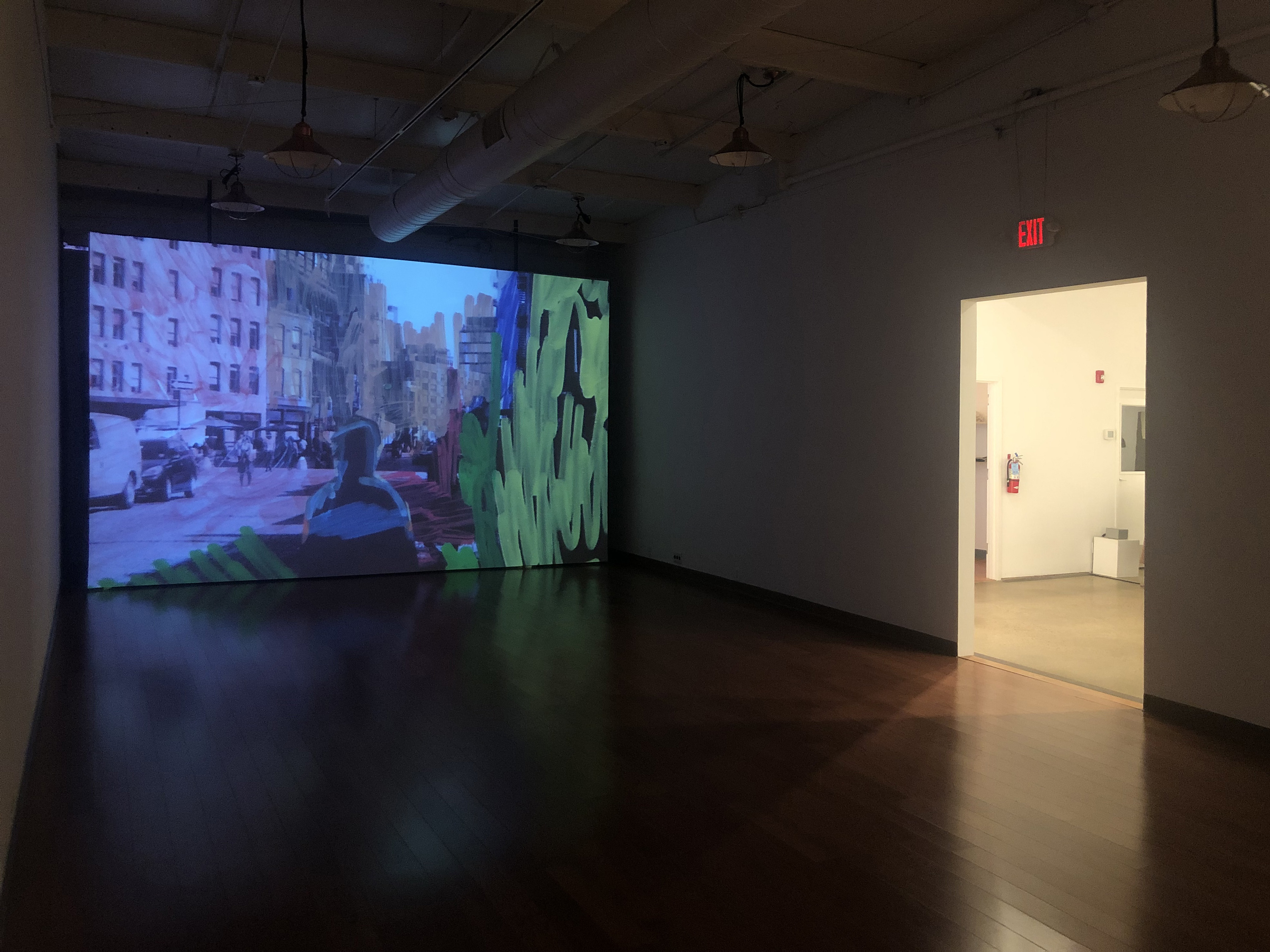 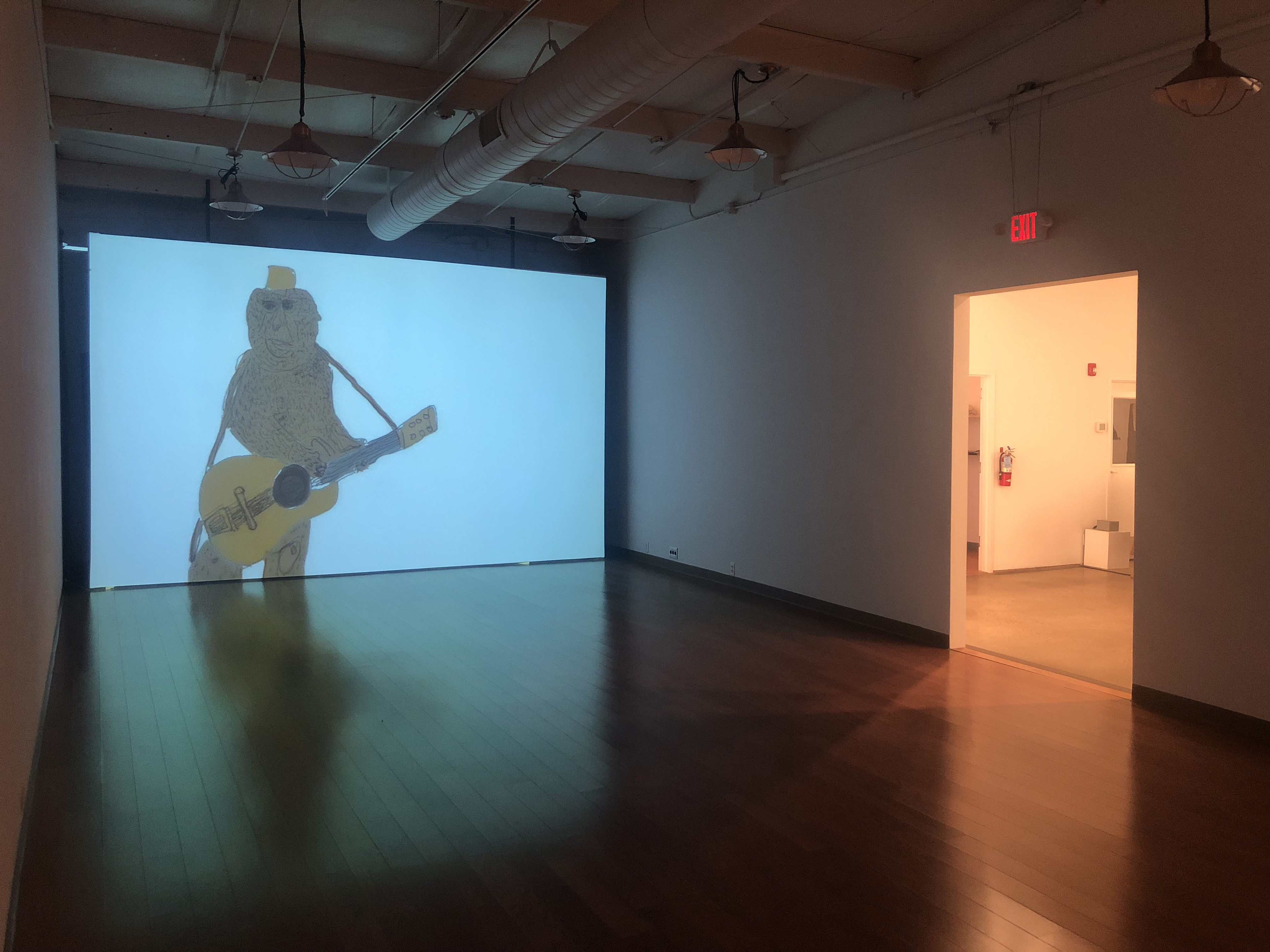 The show features a continuous projection of four short films produced and directed by members of the Oakland-based studio.

History in a Minute, by Gregory Stoper 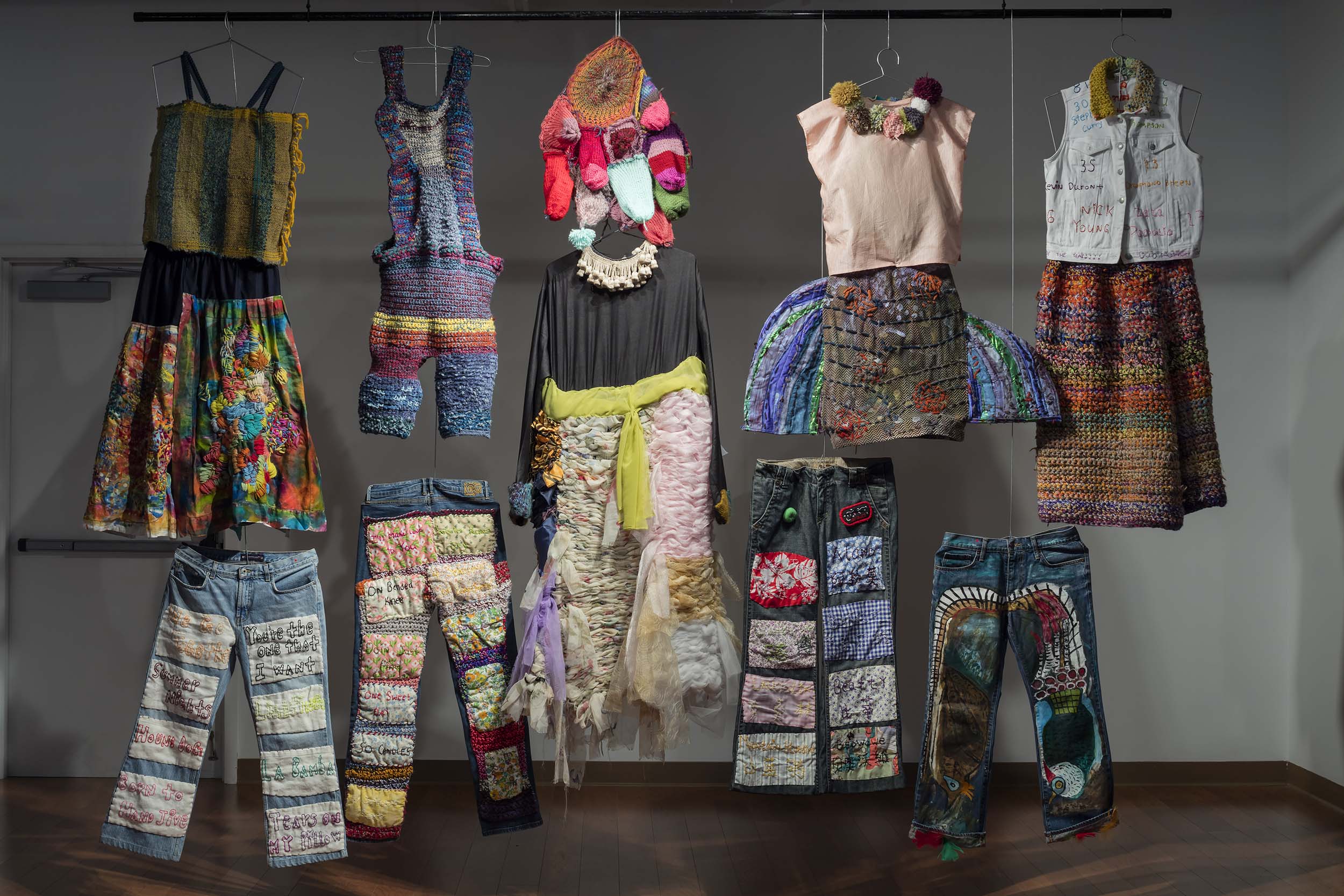 Creative Growth also contributed a collection of ball gowns, mermaid skirts, knit apparel, and jeans from its raucous annual fashion event, Beyond Trend (picture above), as well as an array of John Martin’s oversized imaginary wooden tools (picture below). 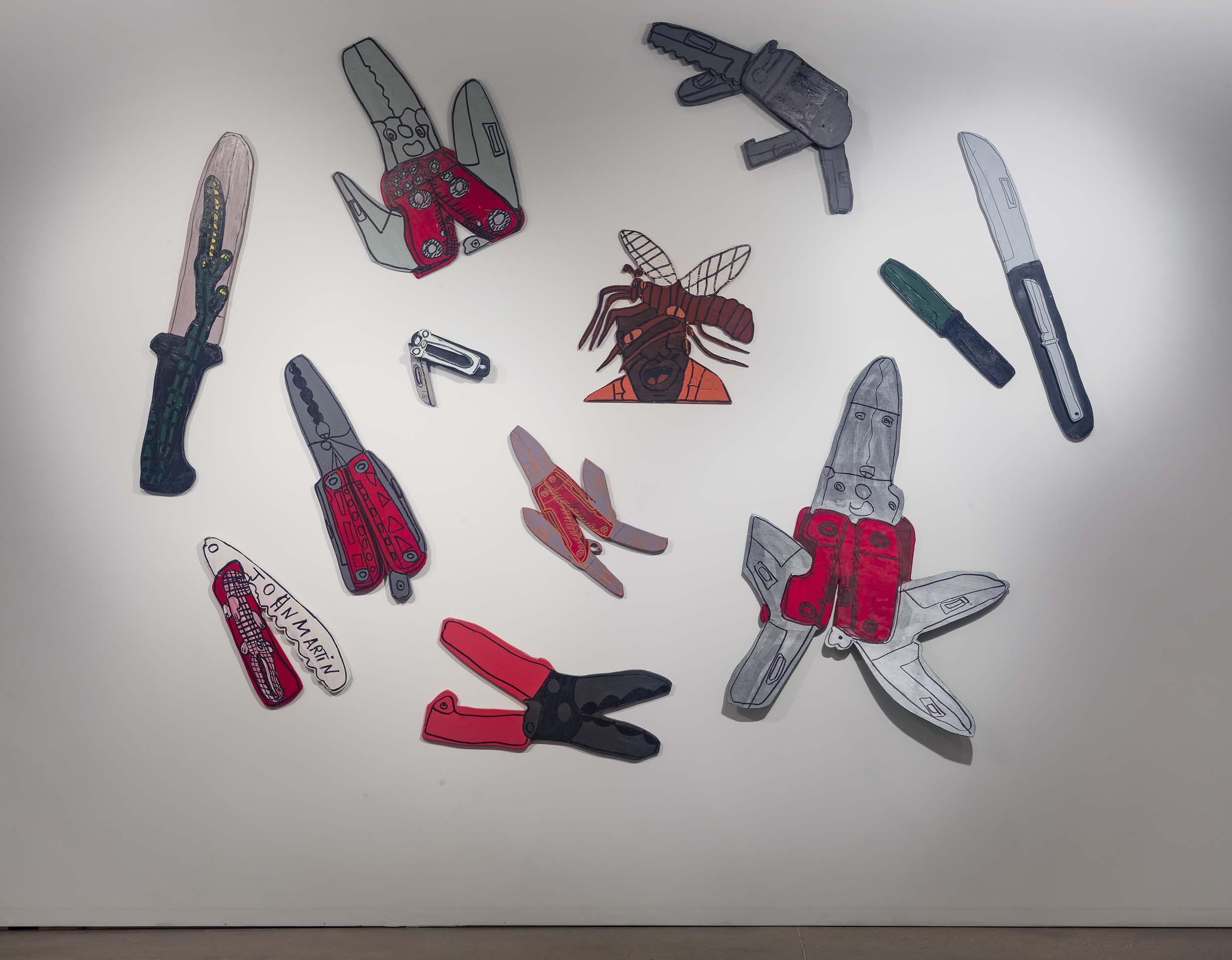 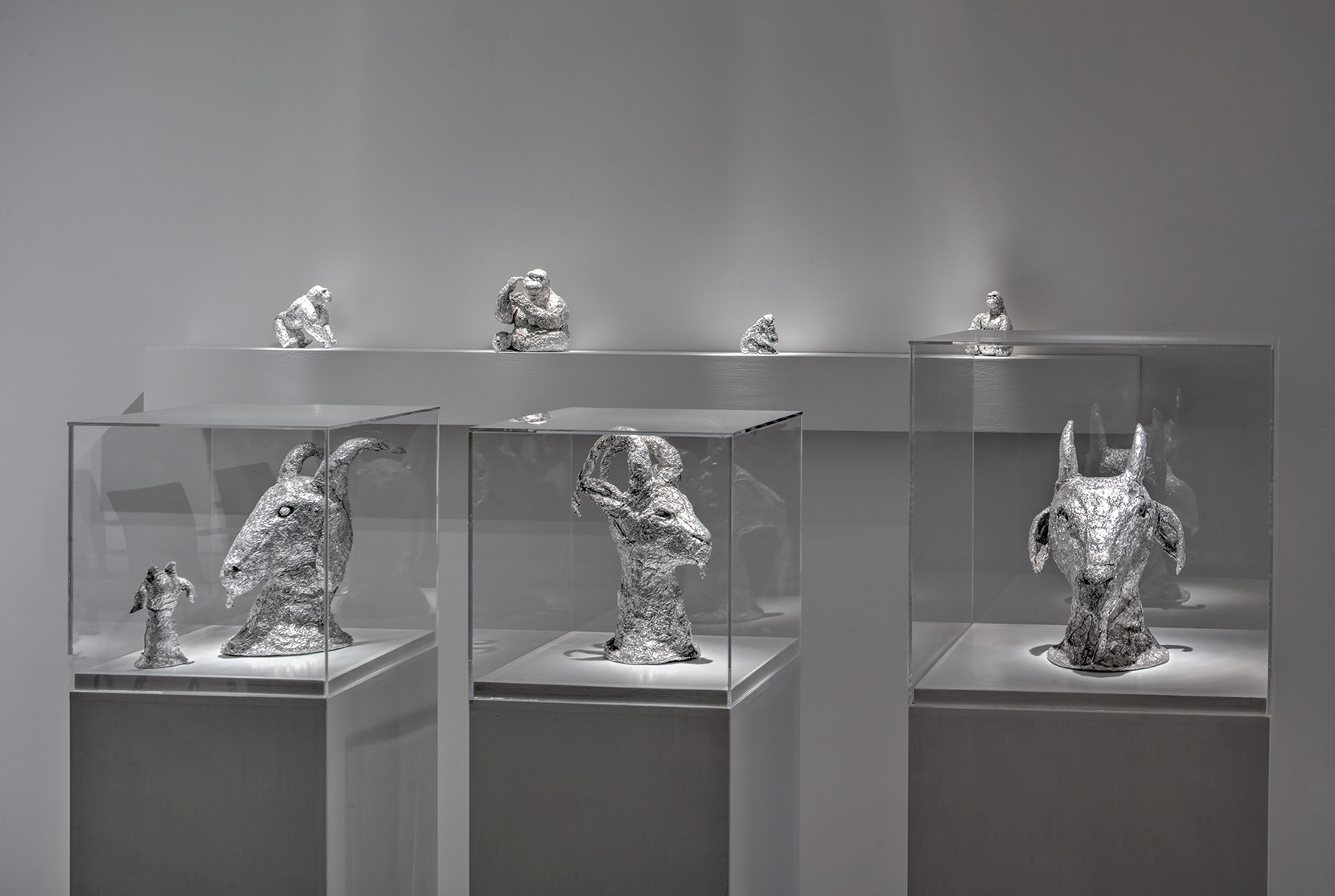 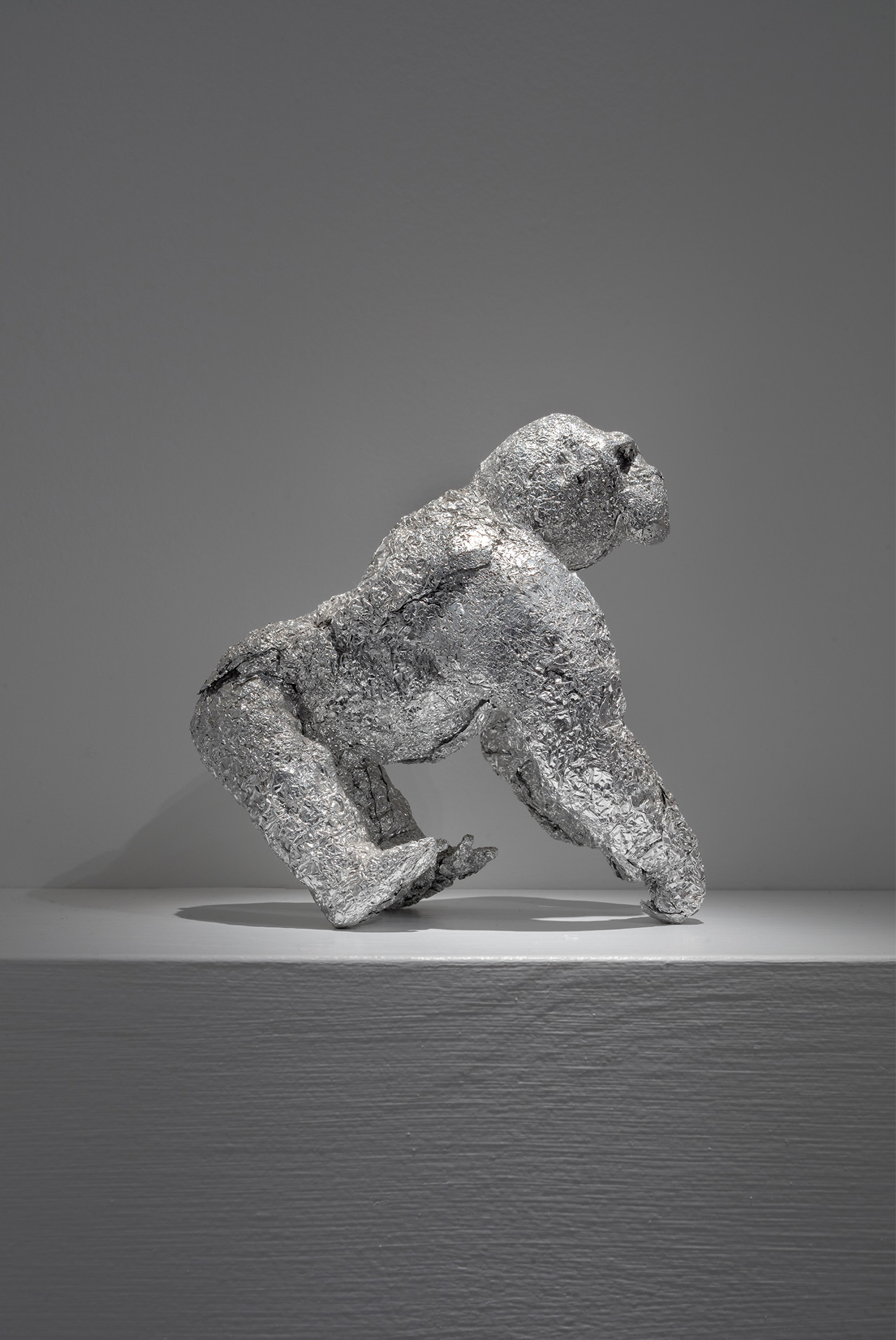 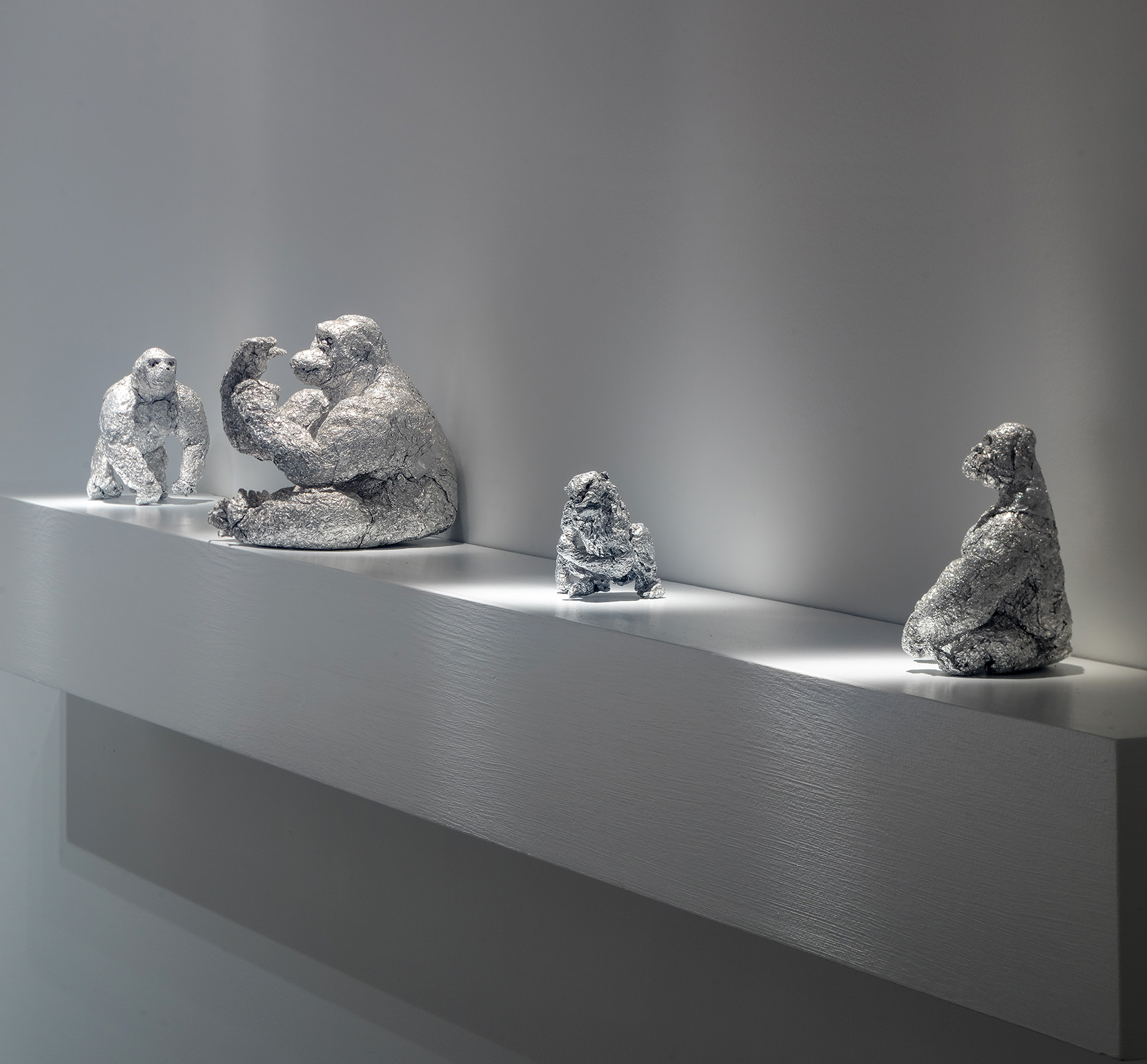 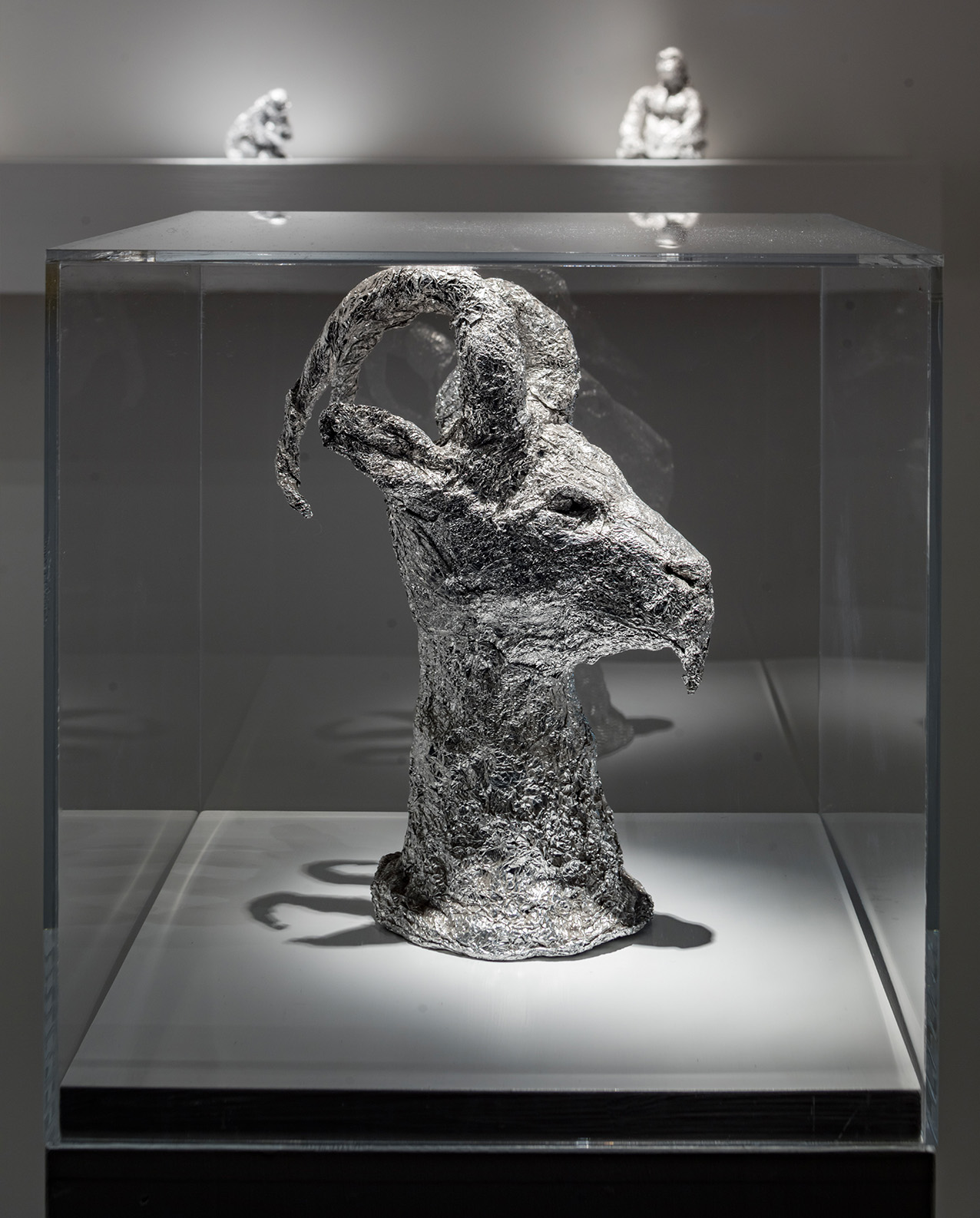 Among the contributions from the Brooklyn-based LAND Gallery are Dean Millien’s diminutive tin-foil animals. 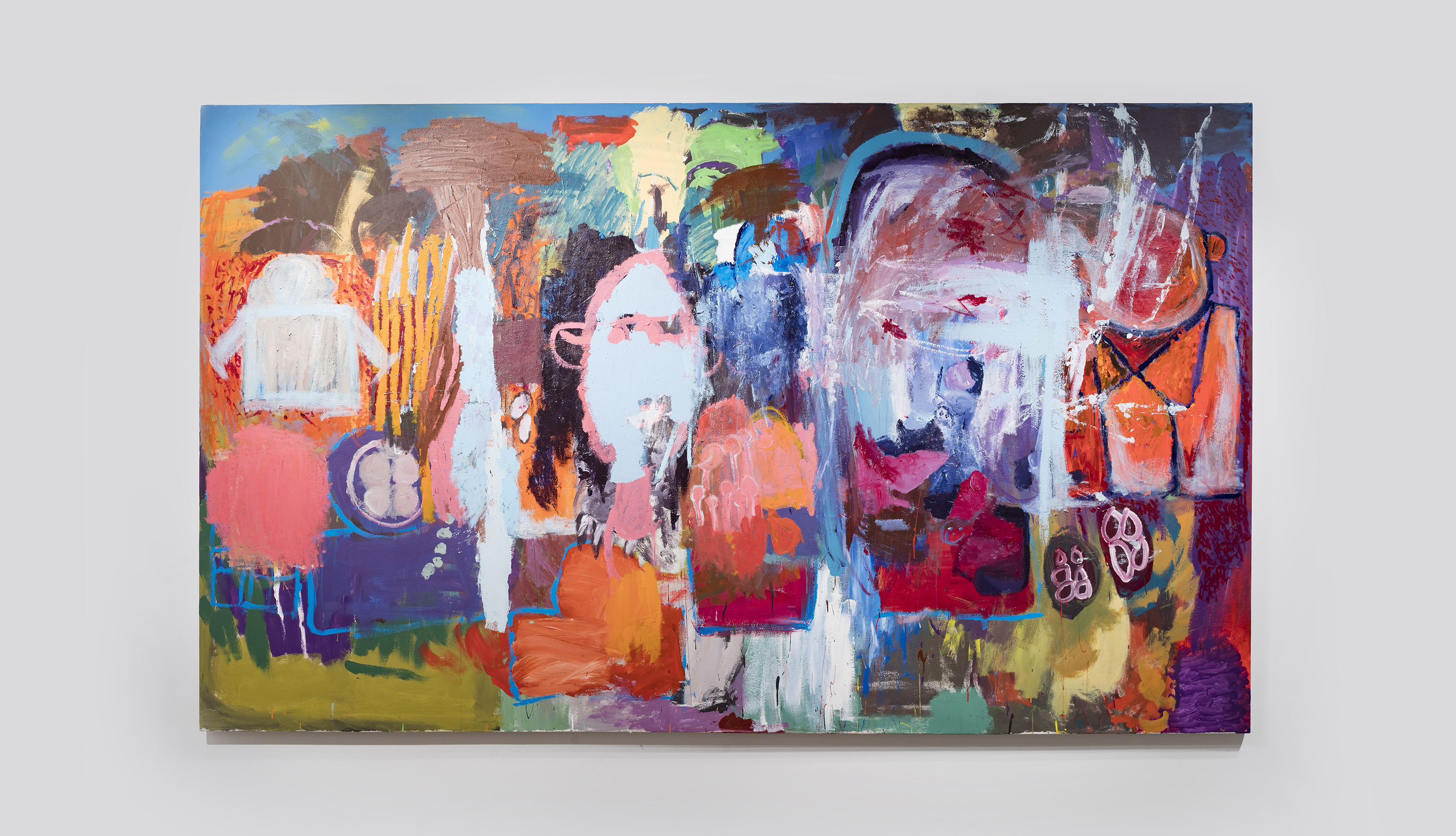 ↑ A collaborative painting by CCW artists from 2013 ↑ 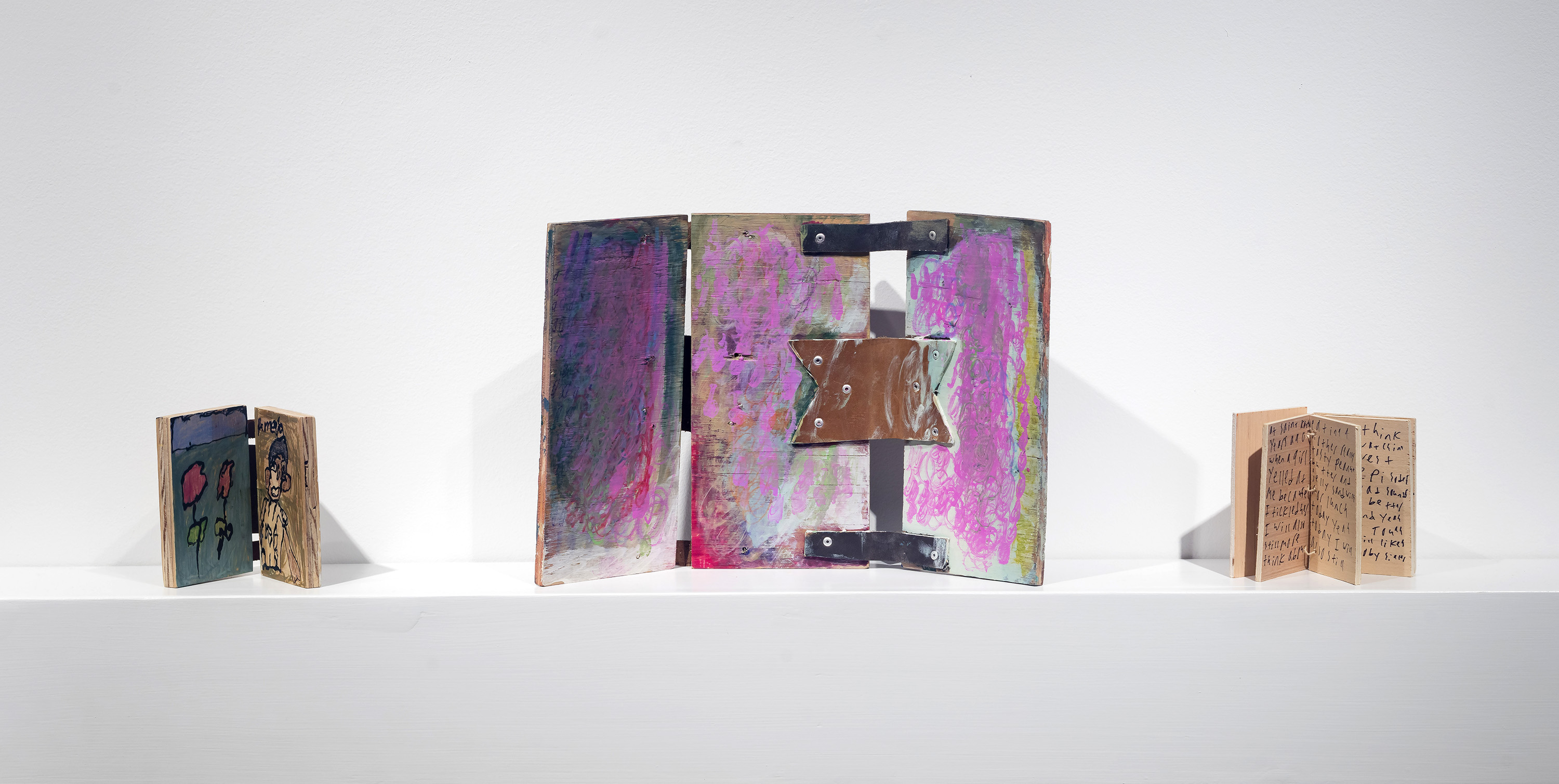 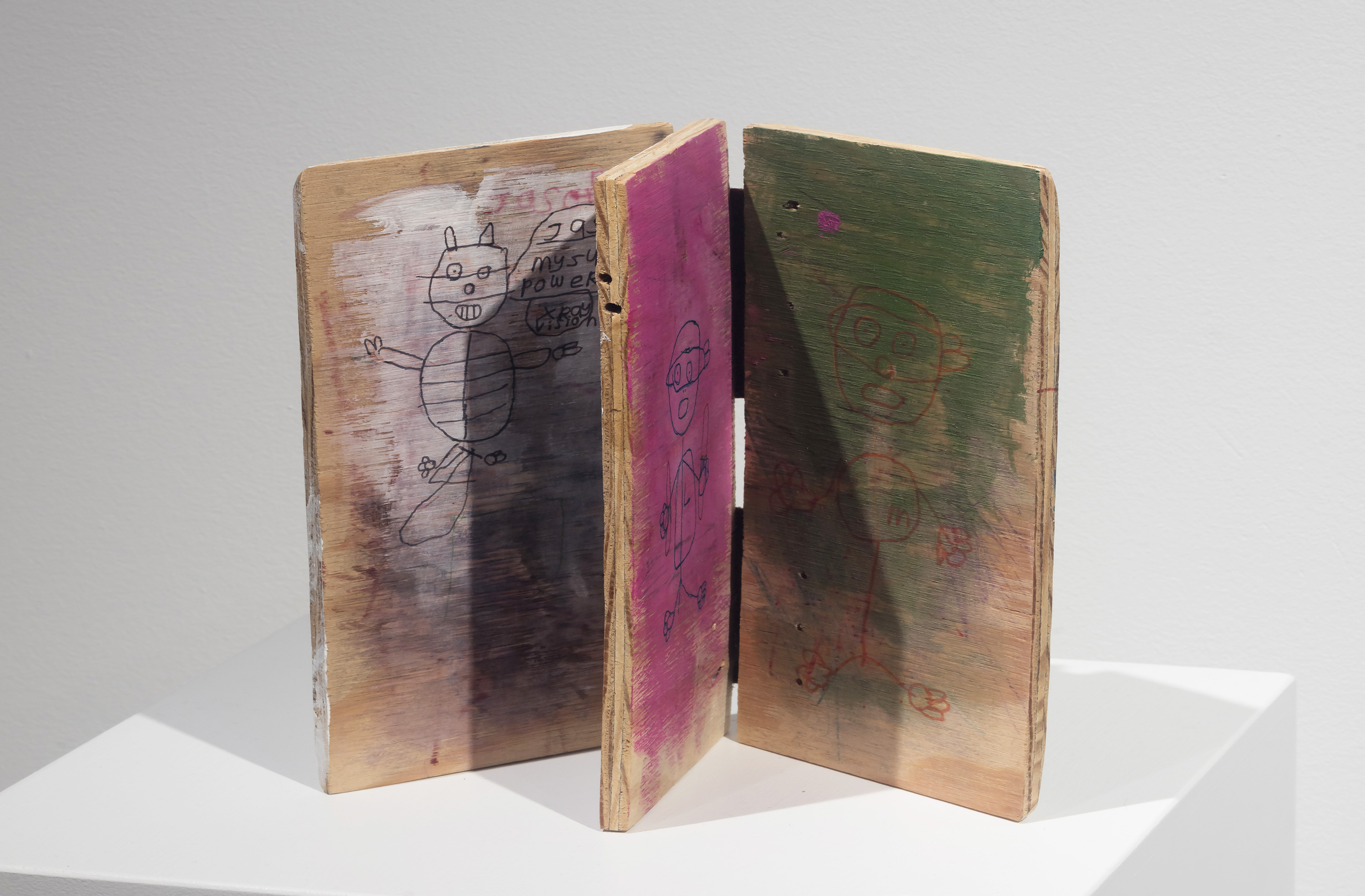 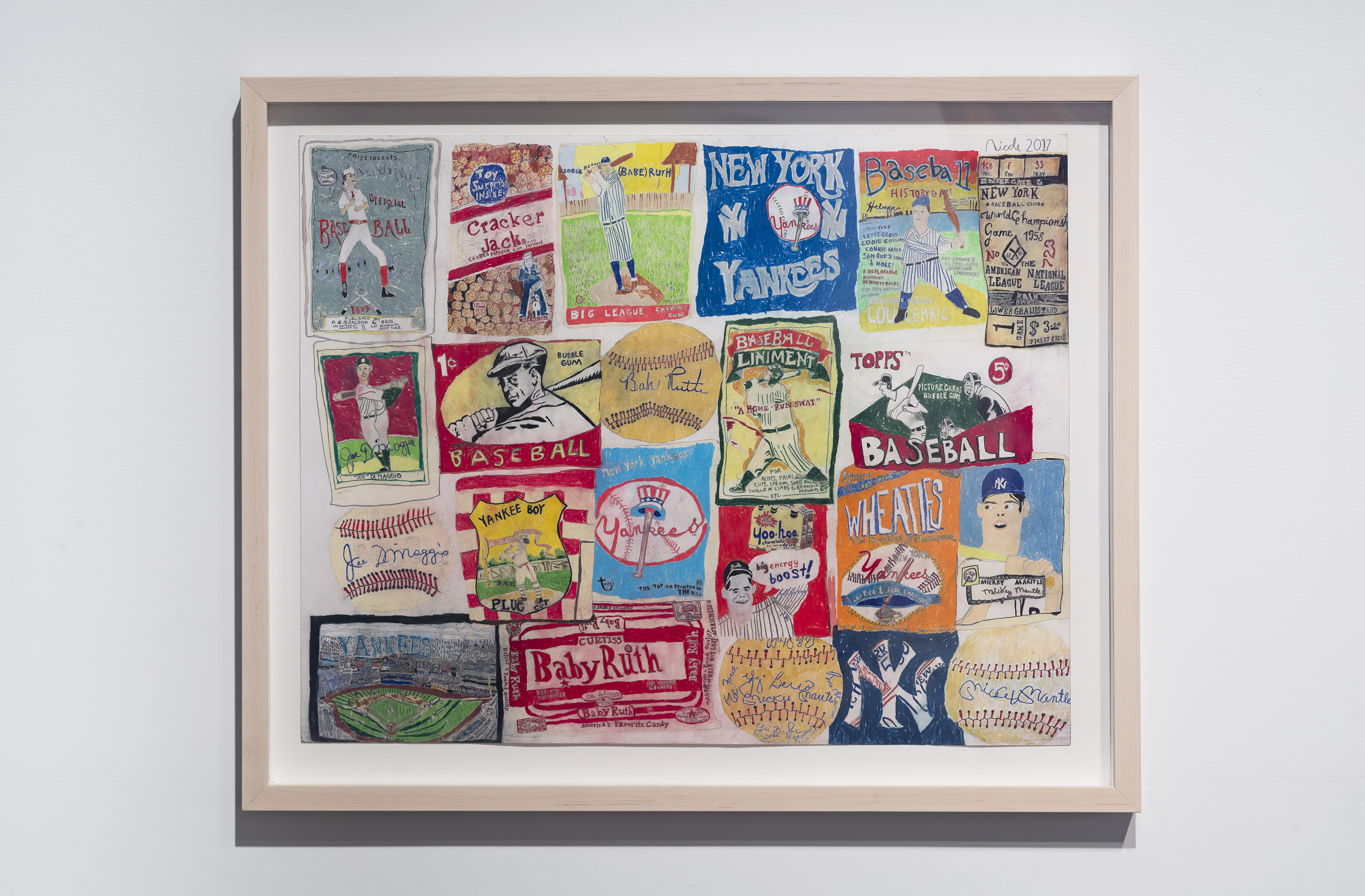 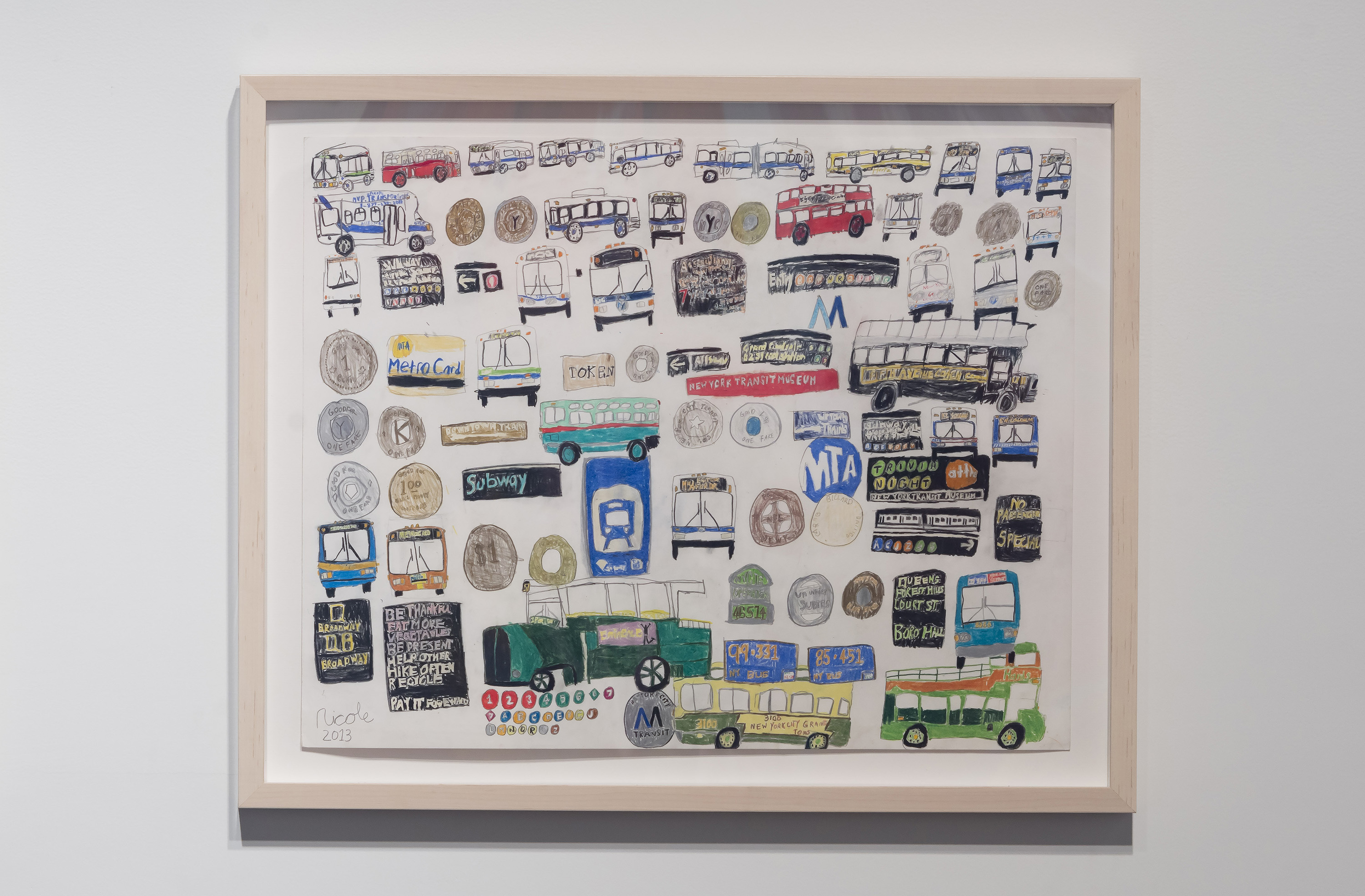 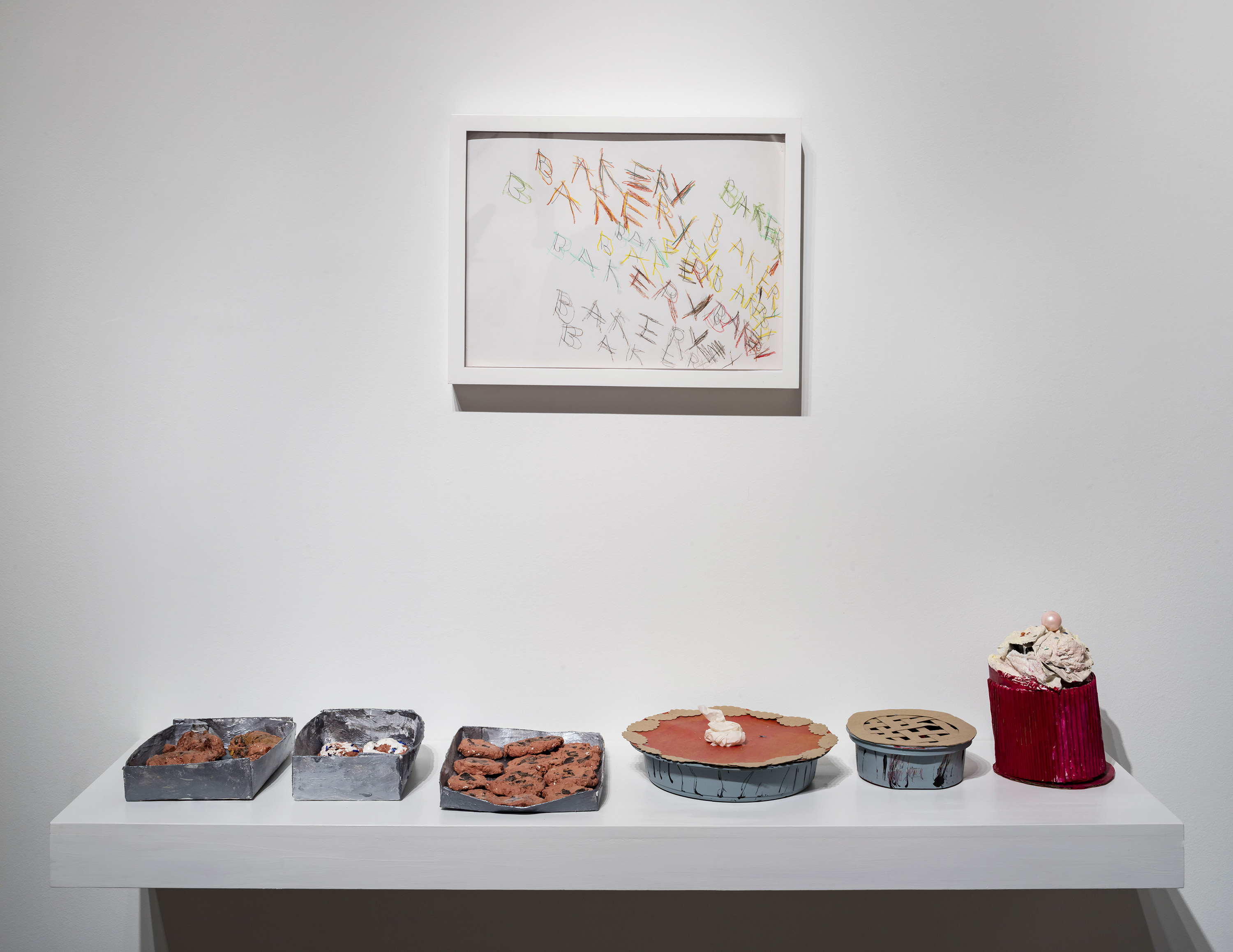 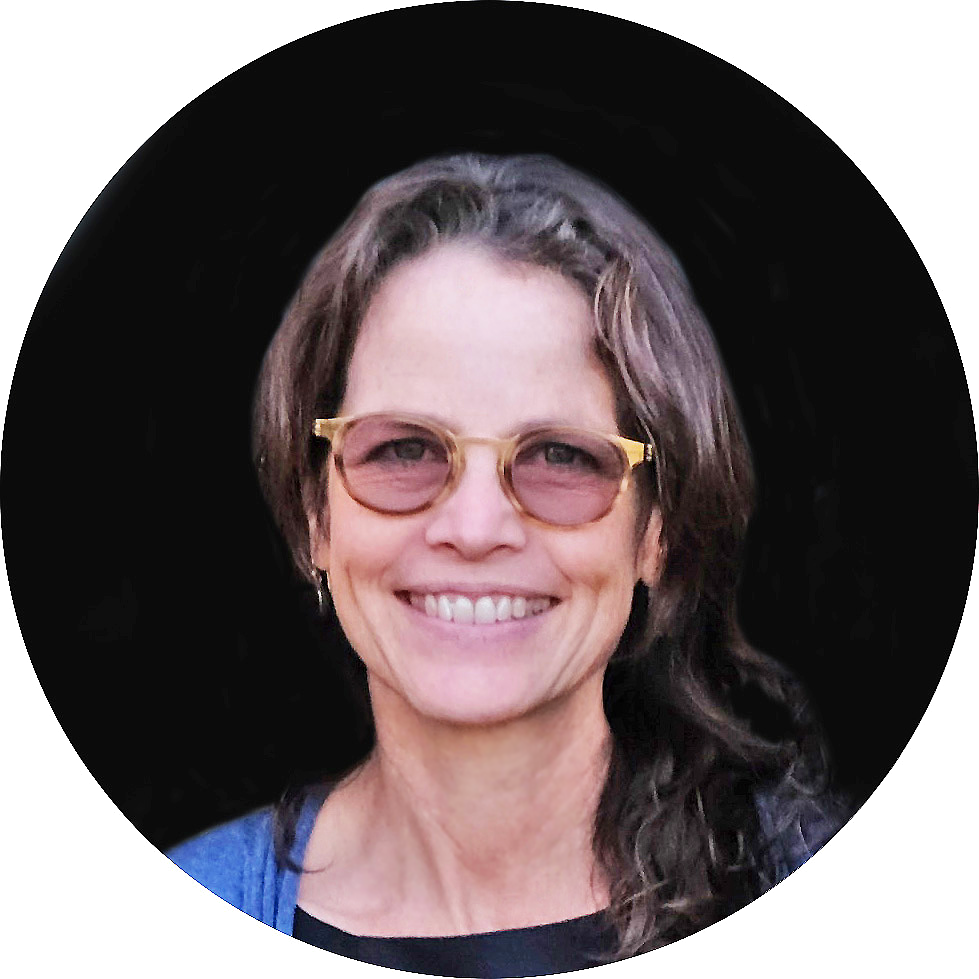 Jill Kearney is a writer, visual artist, curator, and a former journalist and film executive. She is the daughter of artists who founded The Contemporary Art Workshop, an art center housed in a rambling former dairy factory in Chicago, Illinois.  As a child, she spent many formative summers in Provincetown, Mass, where local arts institutions anchored a diverse community of artists, writers, and fisherman. She graduated from Harvard with a degree in English and Creative Writing, worked in Hollywood as a creative executive at Francis Coppola’s Zoetrope Studios,  served as west coast editor of American Film and Premiere Magazine, and later ran the Tribeca Film Center-based offices of Los Angeles film producer Art Linson. She married Stephen McDonnell, founder of Applegate Farms Organic and Natural Meats, moved to Bucks County PA, worked briefly on the sausage line wearing a white cap, raised three strong and capable daughters, and sat on the board of Applegate Farms. Before launching ArtYard she produced theater, dance, and literary events in a cavernous unheated barn in Bucks County PA,  where she developed a deep appreciation for the practice of art as a collaborative enterprise.