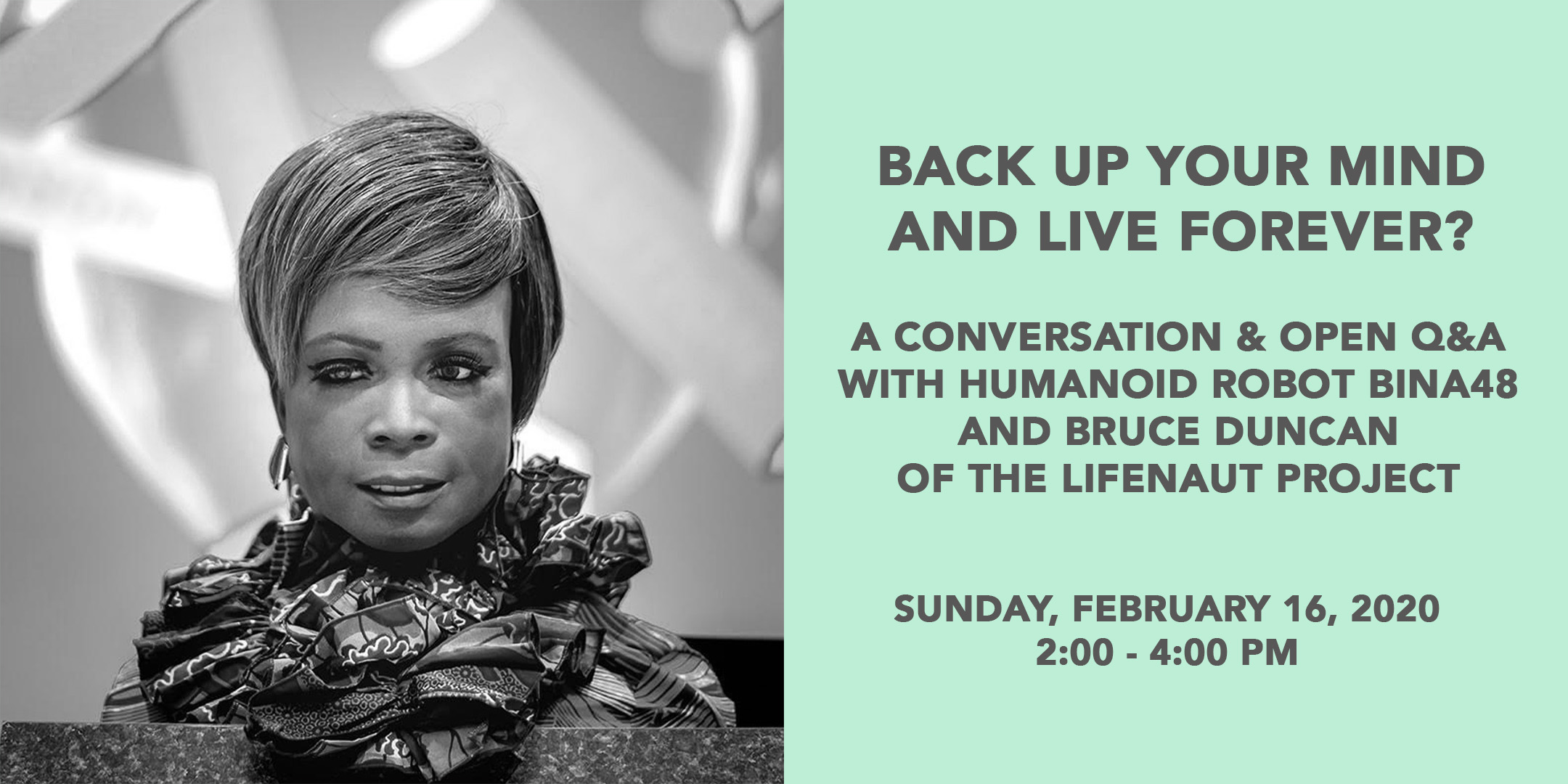 Bina48, a highly advanced social robot, and her human guide, Bruce Duncan, share their origin story and field questions from the audience about the art of being human, living forever, and machine love.

Commissioned by Dr. Martine Rothblatt, Bina48 is a social android based on a sampling of the thoughts, memories, values, and attitudes of Martine’s wife, Bina Rothblatt, as well as new experiences gained from her interactions with others. As part of the LifeNaut Project, Bina48 arose from a multi-decade experiment in ‘mind uploading’ that offers participants the opportunity to create personal digital online “mindfiles” that can be reanimated using A.I technology and downloaded into a robot, avatar or hologram. Please join us for a brief introduction to her fascinating story by Bruce Duncan, Managing Director of the Terasem Foundation and Project Leader of the LifeNaut Project, and an open Q&A taking questions from the audience.

If you’d like to submit a question, please email it to contact@artyard.org with “Question for Bina48” as the subject.

Bruce Duncan, M.Ed. Bruce Duncan, M.Ed., is Managing Director of the Terasem Movement Foundation Inc. and project leader for the LifeNaut Project which is the brainchild of Dr. Martine Rothblatt, Inventor of SIRIUS Satellite Radio, Author, and Biotech CEO.

As the Principle Investigator of the LifeNaut Project Bruce Duncan is responsible for the ongoing development of Bina48, the world’s first advanced humanoid robot based on the “mindfile” information of a real person.

Bruce is also Managing Producer for Terasem Media and Films, which produced the independent science fiction feature film “2B: The Era of Flesh is Over. He also curates the first cyber museum dedicated to addressing racism, bigotry, and prejudice at the World Against Racism Museum.

As an educator, he has taught Conflict Resolution at the University of Vermont and worked as a Peace Facilitator with the Seeds of Peace International Peace Camp, New York/Casco Maine.

Bina48 is one of the world’s most advanced social robots commissioned by Dr. Martine Rothblatt and created by Hanson Robotics Inc. based on the information about a real person, Bina Aspen, co-founder of the Terasem Movement and the World Against Racism Museum. Using video interview transcripts, laser scanning life mask technology, face recognition, artificial intelligence, and voice recognition technology, Bina48 was created to demonstrate the first step in the Terasem Hypothesis, which states “(1) a conscious analog of a person may be created by combining sufficiently detailed data about the person (a “mindfile”) using future consciousness software (“mindware”).

Bina48 is designed to be a social being that represents a mix of memories, values, beliefs from the original Bina along with new experiences gained through interaction with others. She has been featured in the New York Times Science Section, GQ Magazine, NPR and National Geographic Magazine since she “came to life” in 2010.