How Our Community is Coming Together During the COVID-19 Crisis. Sharing a Letter from Eric Fiorito

Yesterday Eric Fiorito, who is ArtYard’s production & volunteer manager, sent a letter to our team to share details about the work that has been going on behind the curtains in regards to distributing food to families in need in our community. We thought that you would appreciate reading his letter, so we are sharing it here with Eric’s permission.

Here’s a little synopsis of the week.

Monday morning, I woke up a bit panicked. We had 24 families on the list who needed food and the pantry was understocked. I had reached out to Cathy Snyder at Rolling Harvest Food Rescue last week and hadn’t heard back. Later that morning I received a message from Debbie Hill, the Food Pantry Organizer from the Presbyterian Church that ShopRite had no food on the shelves. The situation was looking dire, and I was quite frankly extremely worried we weren’t going to be able to feed anyone.

Eric Fiorito on the left, Atticus Fiorito,  and Circe Fiorito
Then, Cathy called me. She had a truck full of milk!  I reached out to Ken Traub, one of the brothers who own and run the IGA, (our local supermarket champions), and they had received non-perishable items such as cereal, snacks, some juice, and some paper products from their suppliers specifically for donation to food pantries. Things were looking brighter.

I called a few restaurant owners in town, to see if we could use a corner of their walk-in refrigerator space. My first call was to Jen Hason of Edible Underground. While she has no room in her walk-in, she offered to hook us up with her supplier who we can order from and they can deliver proteins to the church so we could parcel and freeze them for future delivery.  A wonderful development, but still did not help in the need for a home for 486 1/2 gallon containers of milk. I called Mia from 15 Landsdowne Catering and after she had cooked and distributed Easter meals for people in need, her walk-in was completely empty and she was happy to provide us with storage. She and her husband even gave me my own lock code to have access to their facility 24/7.

Rick Paul on the right, and Joe Coco
We had a home for milk!  I contacted Cathy and she gave me the location of the milk and told me there may be veggies available as well.  Brian Terry and Christopher Robinson from Olive With a Twist called me to arrange to pick up of over $1200 in donations they had raised for the Food Pantry selling eggs to the community. Momentum continued to build.

Tuesday morning, Joe Coco, Frenchtown resident and Rutgers professor, and I departed in the Transit to pick up from New Jersey Farmers Against Hunger, another gleaning organization located in Hightstown, NJ. When we arrived, we found two young women, Sophia and Virginia, working the loading dock with forklifts and pallet jacks unloading a truck’s worth of produce. They proceeded to fill the Transit with a 1/2 pallet of milk, kale salads, yams, potatoes, carrots, asparagus, peppers, and string beans. They were throwing food at us and cheering the entire time.

From there we headed out to Rolling Harvest Food Rescue HQ, Gravity Hill Farm, to drop off some milk and veggies and to pick up cases of apples.  We returned to Frenchtown to meet up with FT Vikings, Rick Paul and Serge Fisun who helped unload the milk and perishables into the walk-in.  By then the IGA was ready for us to pick up the contents of 6 Uframe carts full of staples. Circe and Atticus helped load juice, pasta, sauce, cereal, snacks,  paper products, cleaning supplies, TP, canned tuna and more. The Transit was a mighty steed filled to the roof with food.  Then, Jim Traub handed me 20- $50 IGA gift cards to hand out.

Wednesday rolled around and it was time to assemble the bundle of food that each family would receive from the Pantry.  I met with Debbie and we talked about some possibilities of how to upgrade the Food Pantries capacity to handle frozen proteins and fresh vegetables. With the help of Steve, Debbie, Eugene Hill, Carol Sworen, Maureen Breiner, Circe, Atticus, Grace, Rick, Serge, and Ulla, we set upon the task of assembling the Family Parcels of food.

Another call from Ken Traub came in, He put together 31 protein bundles consisting of 4 lbs chicken, 3 lbs ground beef, 1lb sausage, 1lb bacon, Bags of oranges, hands of bananas, peppers, onions, and more veggies.  All Donated by the IGA.  We scooped these up and added them to the Family Bundles. While the home team distributed food to families who drove up to the church, the away team loaded the Transit twice with enough food for 12 families to be delivered to those who couldn’t make it to the church for pick up.

I can’t even begin to explain the joy and relief in people’s eyes when they saw what we had to offer them.  Time and time again, there were  “words just aren’t big enough to express how we feel ” moments, as we stood at people’s doors and witnessed weight being lifted from their shoulders.

These are indeed terrifying days wracked with anxiety, uncertainty, and fear…but what I’ve witnessed this week has made me so unbelievably proud to be a part of this community and has reassured me that we will weather this storm and come through into the light together.

I want to say Thank You to so many people who have supported this effort, but mostly I need to thank Jill, Kandy, and my ArtYard Team for allowing me the time to represent a portion of our mission of putting unlikely people together to strengthen our community in a beautiful way. Words do not express how much I appreciate each and every one of you and everything you do to make ArtYard this unbelievable force of positivity in a chaotic world.

Thanks so much, my heart feels as if it could burst with joy knowing ArtYard made such a difference in our neighbors’ lives.

Editors footnote: ArtYard’s managing director Kandy Ferree has been a force in coordinating Frenchtown relief efforts, sidelined from the vegetable action only by a broken leg. Thank you, Kandy, on behalf of the ArtYard team
and our Frenchtown community. 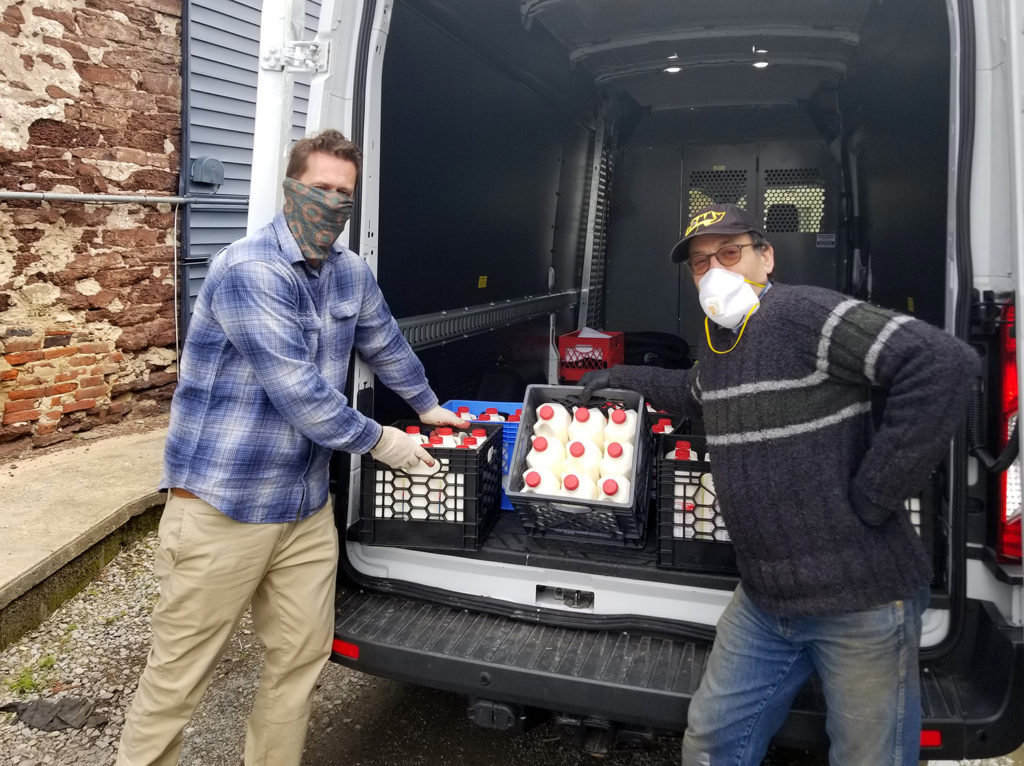 Rick Paul on the right, and Joe Coco 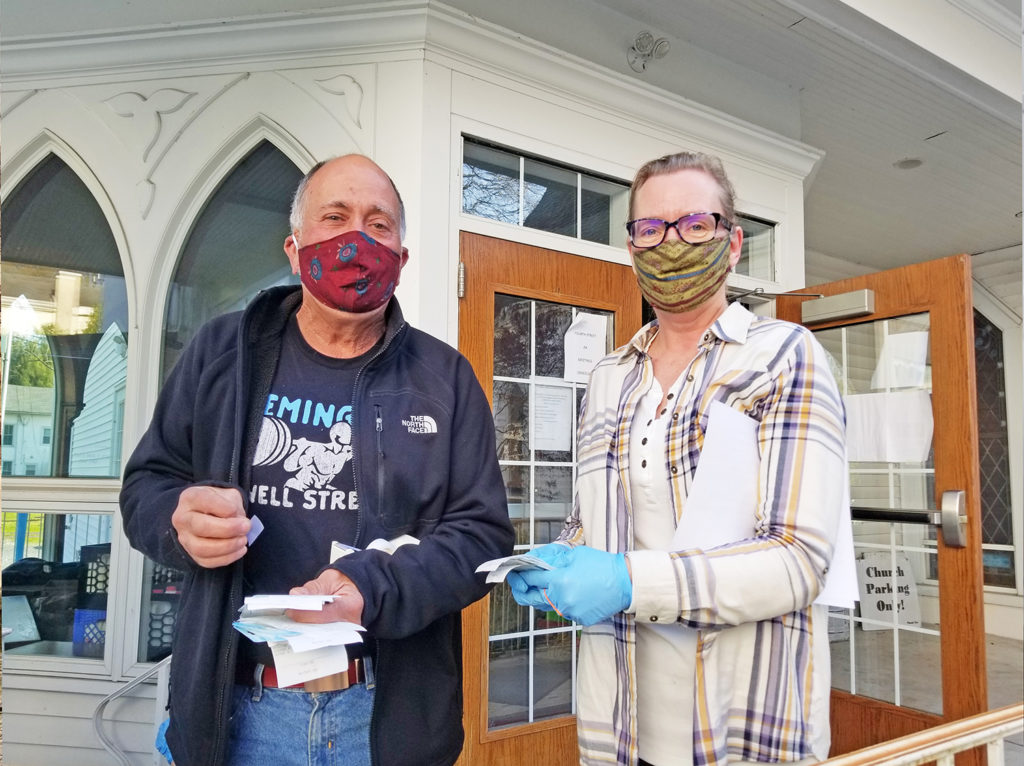 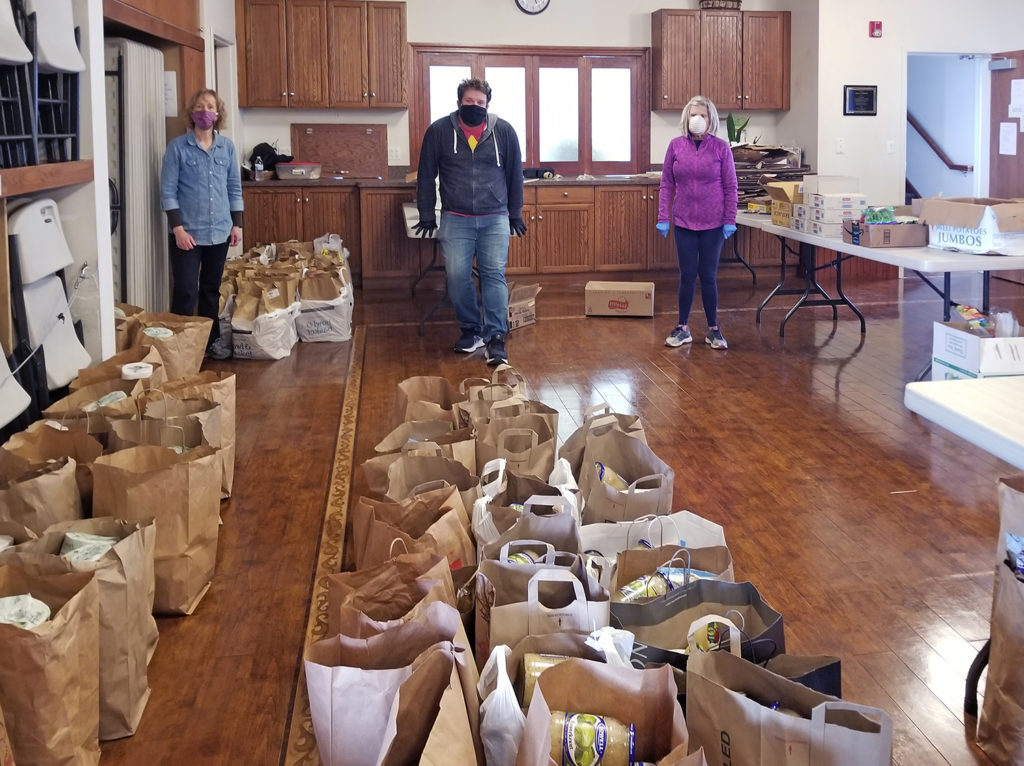 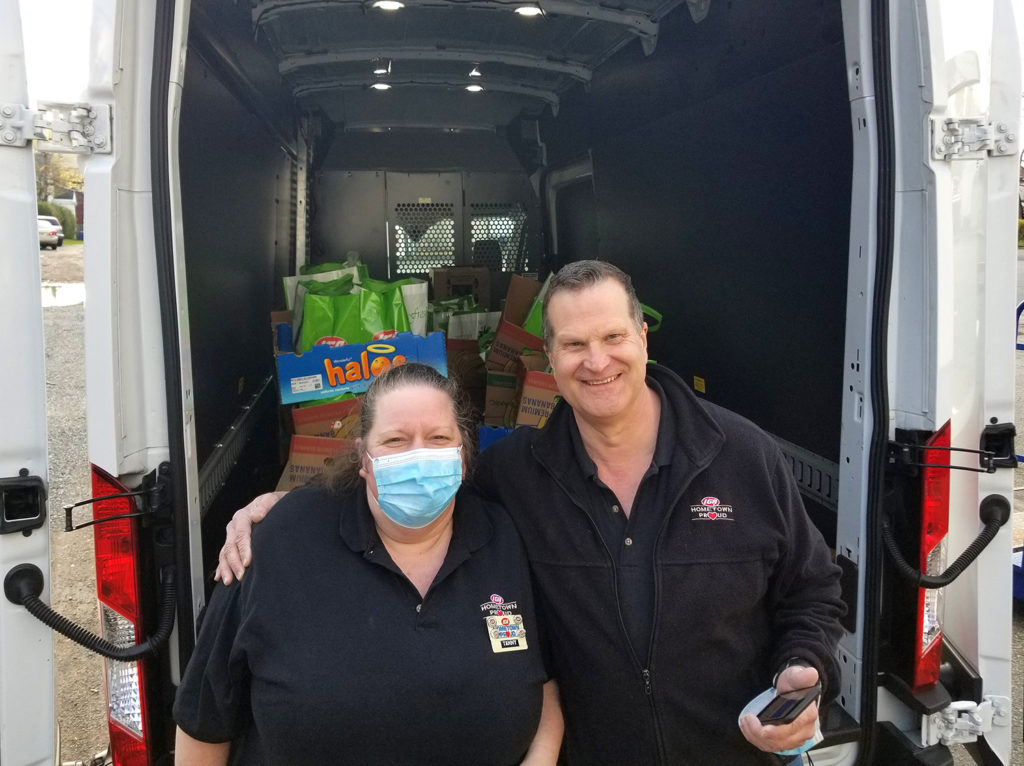 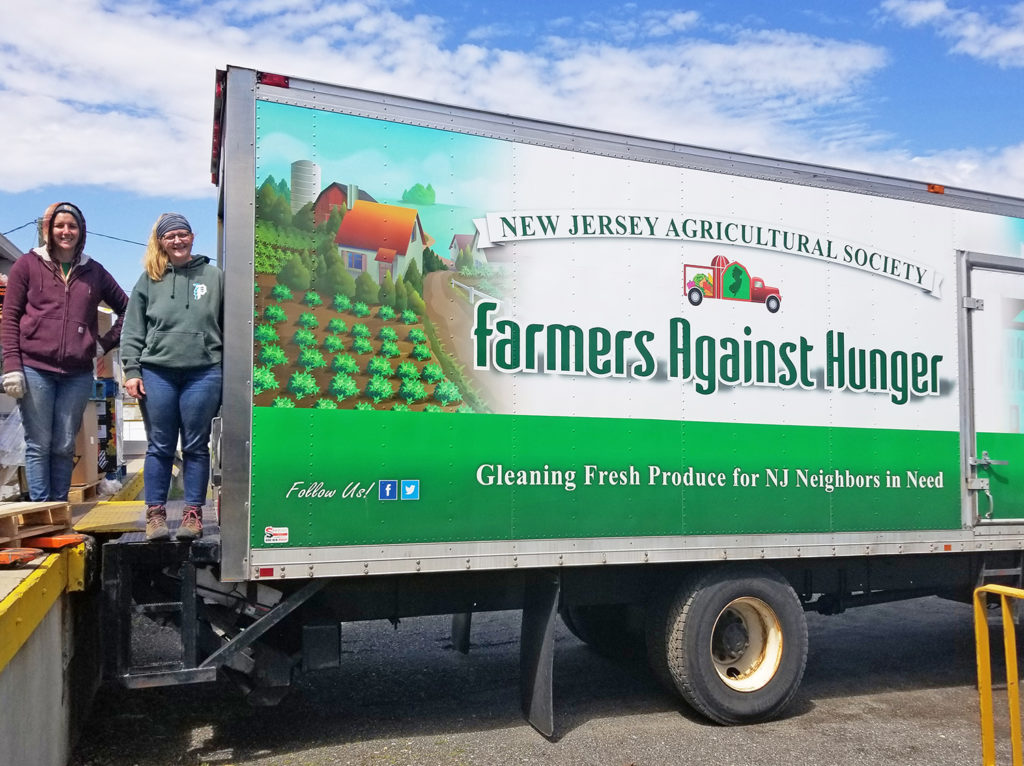 Virginia on the left, and Sophia 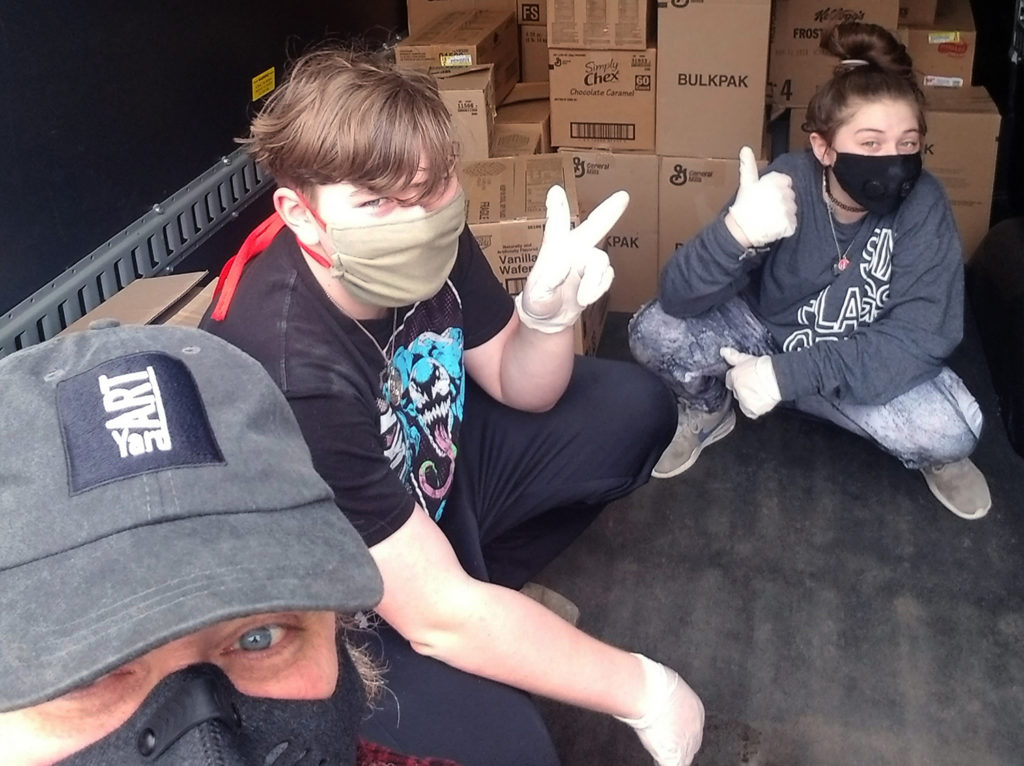 Eric Fiorito on the left, Atticus Fiorito, and Circe Fiorito 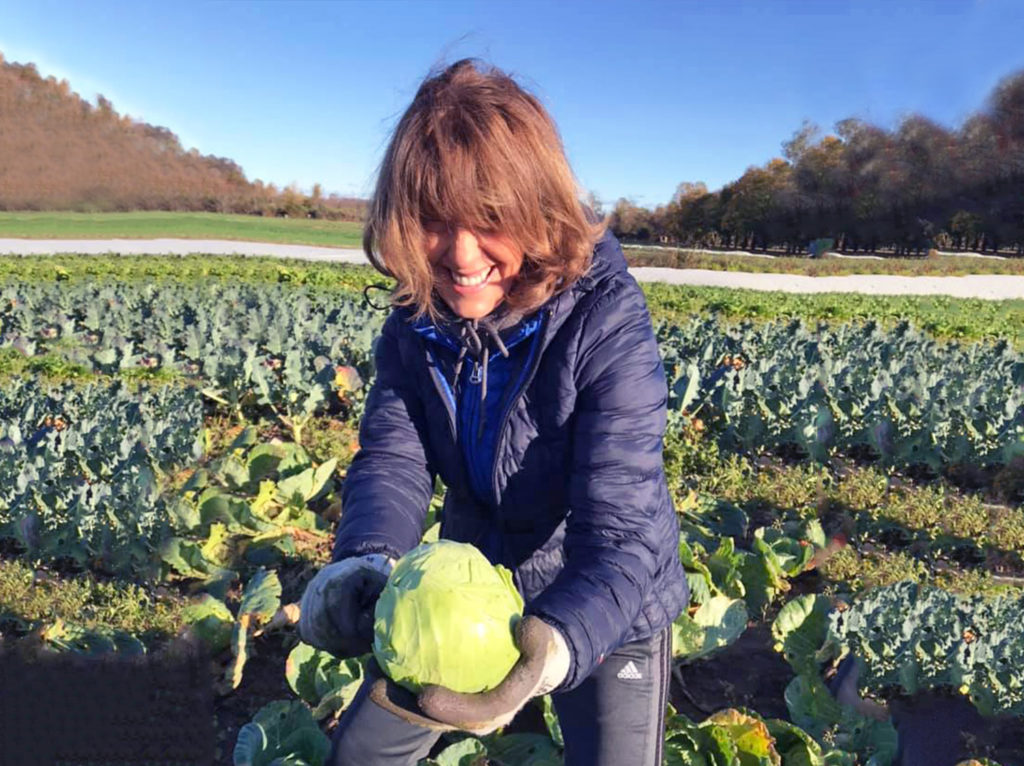 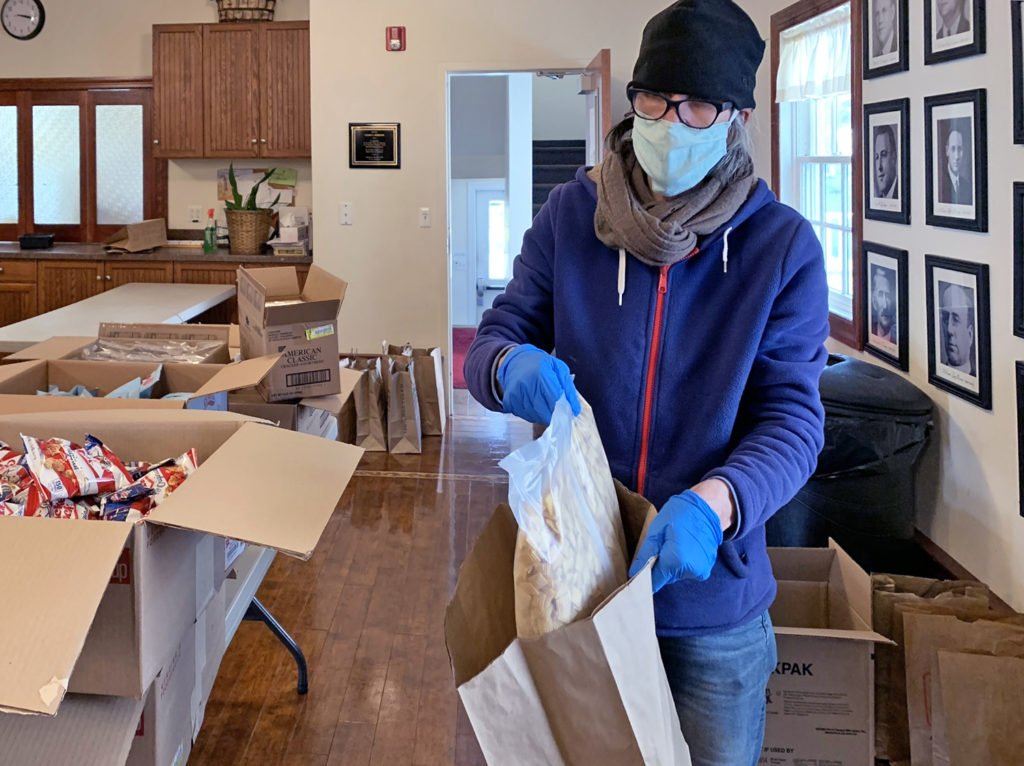