Most recently I have been exploring notions of monumentality and the human form through a series of sculpted figures. Created with a process that begins with the digging and gathering of soil from various locales and progresses in the studio through such actions as welding, casting, modeling, and carving, I create these figures in order to open up narratives that speak through both image and materiality.

At the core of these works are reflections on place. Over the past year, I had been traveling to various countries including Dhrangadhra in India, Gaborone in Botswana, and Durban, Cape Town, and the Karoo, in South Africa. In each location, I gathered sand and dirt and embedded this sampling of earth into cement carvings of small birds and figures. Experiencing the particular terrain of each site and creating work on that site was a way for me to engage intimately and physically with the very stuff of a place. In digging into the soil and quite literally using it as raw material in making my cement forms I was able to reflect on landscape as ground and to literally draw from it. Perhaps this was rooted in some longing to better understand how political and personal histories are inherent in the ever-present awareness of place. Or how ground, land, soil, and earth reference a sense of belonging. Perhaps the very act of taking dirt and including it in these works was a momentary act of appropriation of the land and soil, for by including it in the work I take it, I replace it. This small gesture for me, spoke to a larger issue of land as identity. I was also conscious that in journeying to locales both familiar and unfamiliar the works that I created were a very direct response to my tactile experiences of that site. For each work, I used the local aggregate from that place in an attempt to ‘mark’ or reflect on that place and its history.

My most recent work-Traces and Transition/Displacements and Land/Displacements- are large weighty recumbent forms that for me reference both massive funerary statue and a memorial. This work belongs to no specific place but is one that can be moved from site to site, displaced. The sculptures have weight and allude to solidity and structure, yet are inherently modular and transient. In some of the work, carvings of birds swarm over, blanket, flow, or swirl and partially obscure the body. During the process of creating each carving, I reflected upon the movement of those creatures as driven by some unseen collective intelligence. Yet the repetitive act of carving each sculpture in various locations gave voice to the act of being in a place while considering the collective migratory patterns of creatures- of flocks, swarms, and pods. Also in play are what have been recurring themes in my work. These are issues of permanence and impermanence, location and dislocation, and place and displacement. 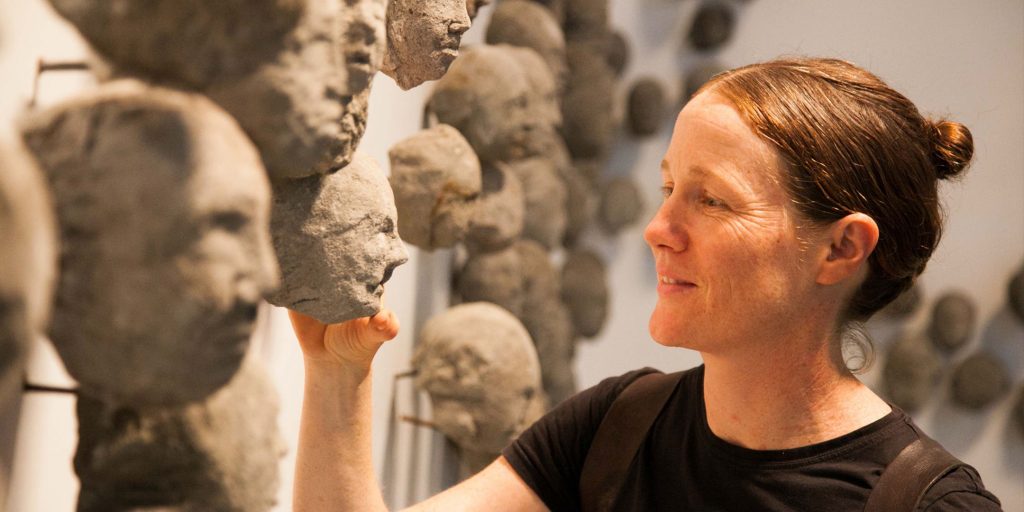