I read recently of the impending opening of the Museum of Failure in Helsingborg, Sweden. I recognized immediately the launch of a kindred institution, and I hope to visit it one day. ArtYard will be one year old on September 4th, 2017. We are really pleased with what we have been able to accomplish in so short a time. Besides acquiring, renovating and occupying our unfolding campus, we produced a festival of birds, installed a series of original art exhibitions, tested a residency program, launched a film series with visiting filmmakers and musicians, produced a collaborative installation representing a human brain, and held a valentine making experiment aiming to extend kindness and compassion beyond the obvious intimate circles.

From left to right: Our temporary theater built by Chris Langhart and his helpers, group photo with (left to right) Magda, Kearney, Nora, Elsa, Flannery, Jill, and Juanita prior to ArtYard’s hatching, visitors during the opening of Bedlam and Balance, Filmyard event with Gary Sherman (left), Bill Horberg (center), and Brett Berns (right), Eliot Bassett-Cann testing our Rashomon Machine, and experimental valentine workshop with members of the local community.

We have developed a poetry on demand event with our own Poetry Confessional from which anonymous poets produce works for supplicants in need of absolution or a tribute to a beloved dog.  We scheduled a premiere of an original operetta written by a Frenchtown composer.  Almost every project we have undertaken is a first, and as a result, we have also compiled an impressive collection of errors.

On the left, ArtYard’s Poetry Confessional built by Lucinda Warchol. On the right is our friend Warren Cooper, poet and former mayor of Frenchtown, NJ.

I’m proud of what we have managed in such a short time, but in some way, I am prouder of our mistakes.  I thought it might be instructive to give a peek behind the curtain at ArtYard. It’s messy back here. Murphy’s Law reigns.

Did we underestimate the time it would take or the manpower involved in building a maze of mirrors or mounting an exhibition? Did we have to drag a giant egg across the bridge from Pennsylvania, and did the straps securing the egg to the trailer come loose en route, threatening to kill us all? Did we consider that if we put three thousand nails on a gallery wall for Vessna Perunovich’s installation, we would be pounding on the contiguous wall of the Lovin’ Oven restaurant where diners were trying to consume a peaceful meal, or that we would have to spackle and sand the three thousand holes in a timely fashion before we mounted the next show? Did we say yes to more ideas than we could accomplish among ourselves so that two out of three of us landed in the ER on the same week?

Spackling and sanding the three thousand holes left after Infinite Wall, an installation by Vessna Perunovich.

Did we have to begin to learn how to say “no” or “please wait a year or two” graciously to the many kind and creative neighbors who wander in?  Yes to all of the above.  Did we think that the variance we received from the town for a permanent theater in the back of the 62a Trenton building would clearly cover the much smaller temporary theater we had constructed so we could begin our program without waiting for the permanent theater to be built? Did we have to go back to the town and request a separate variance, and notify the neighbors all over again? And having received the second variance did we come to the conclusion for many good and valid reasons that we didn’t want an art program in one space and a theater program in another, but an integrated program under the same roof: meaning, are we headed back to the Planning Board for a third round, proposing the theater and gallery complex to be moved to the Hatchery site? Yes, we are!

In general, I have found these mistakes more entertaining than horrifying in that way that hysteria is exhilarating and things going horribly wrong can make you feel fallible, human and happy to be alive. Humor derives from the unexpected, and after a few decades of knowing too well the drill of my life, I have entered a new phase where I can almost never predict what is coming at me that I mostly unleashed on myself.

Take for example the Random Acts of Kindness workshop we held in February. The idea came to me while I was driving up River Road four days earlier, trying to muster the courage to listen to the news.  We live in uncomfortable times.  Current events are forcing me to confront my latent anger, intolerance, and judgment of people with whom I disagree. 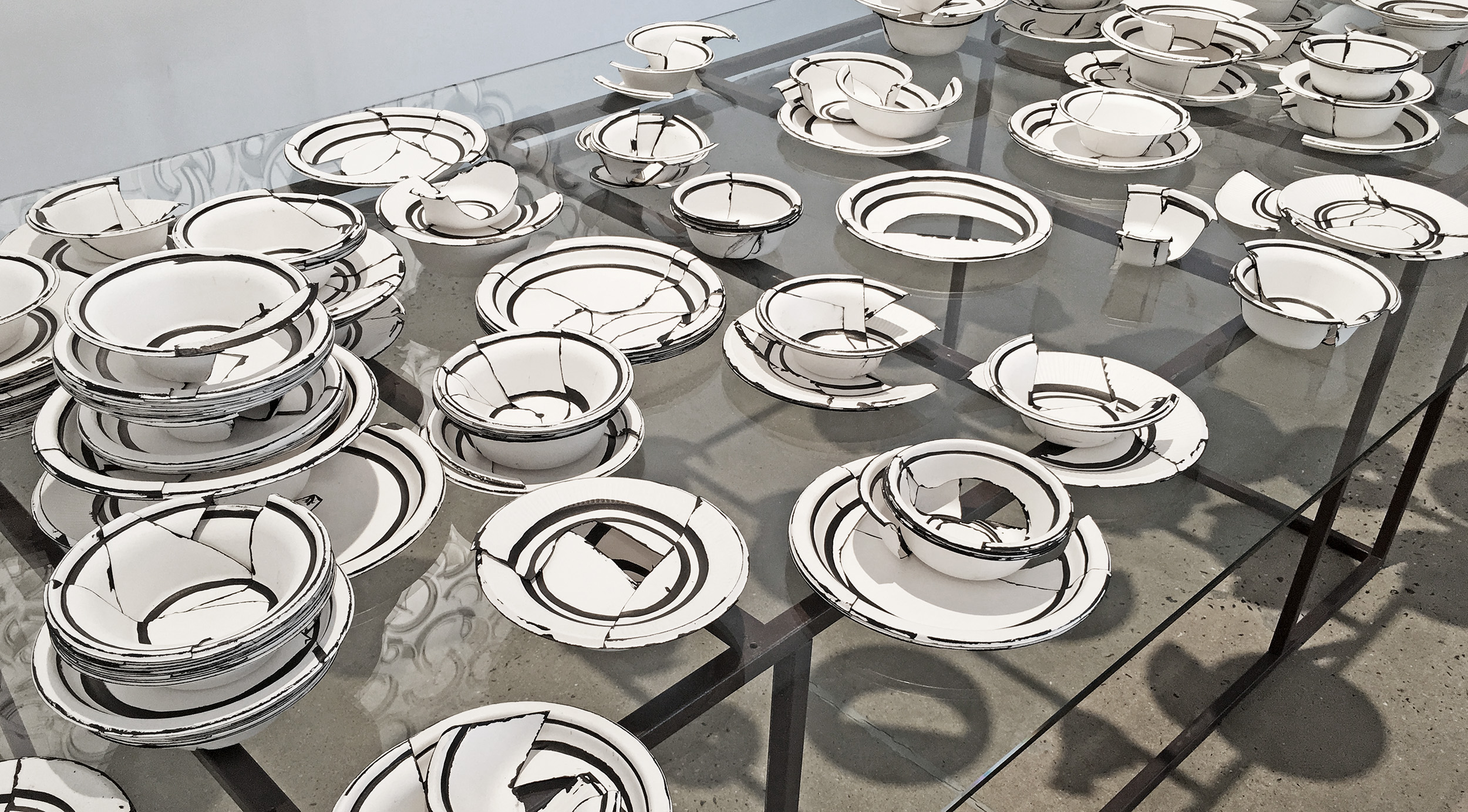 Mending Broken China, an installation by Vessna Perunovich which was part of Bedlam and Balance.

Wouldn’t it be a curious exercise, I thought, to borrow the form from a Buddhist Metta or Loving Kindness Meditation, and use it as a frame for an exercise wherein participants create a valentine for someone beloved, someone neutral (a stranger, for example,) and finally someone difficult? I called Elsa and we hatched a plan. The only available date was three days ahead. Any rational person would have concluded that that wasn’t sufficient time to plan a workshop.  But we relished the prospect of not knowing who might show up, or what difficult relationships they might bring to the table, or what beautiful strange objects might result. We didn’t think to consider that small children might come in the care of their mothers. Or that we would be asking young beings to make valentines to strangers (they’re not supposed to speak to them!) and maybe clouding the simple joy of Valentines Day with our adult ambivalences. When the day arrived, and in the presence of children, our idea seemed suddenly, actually, kind of mean. 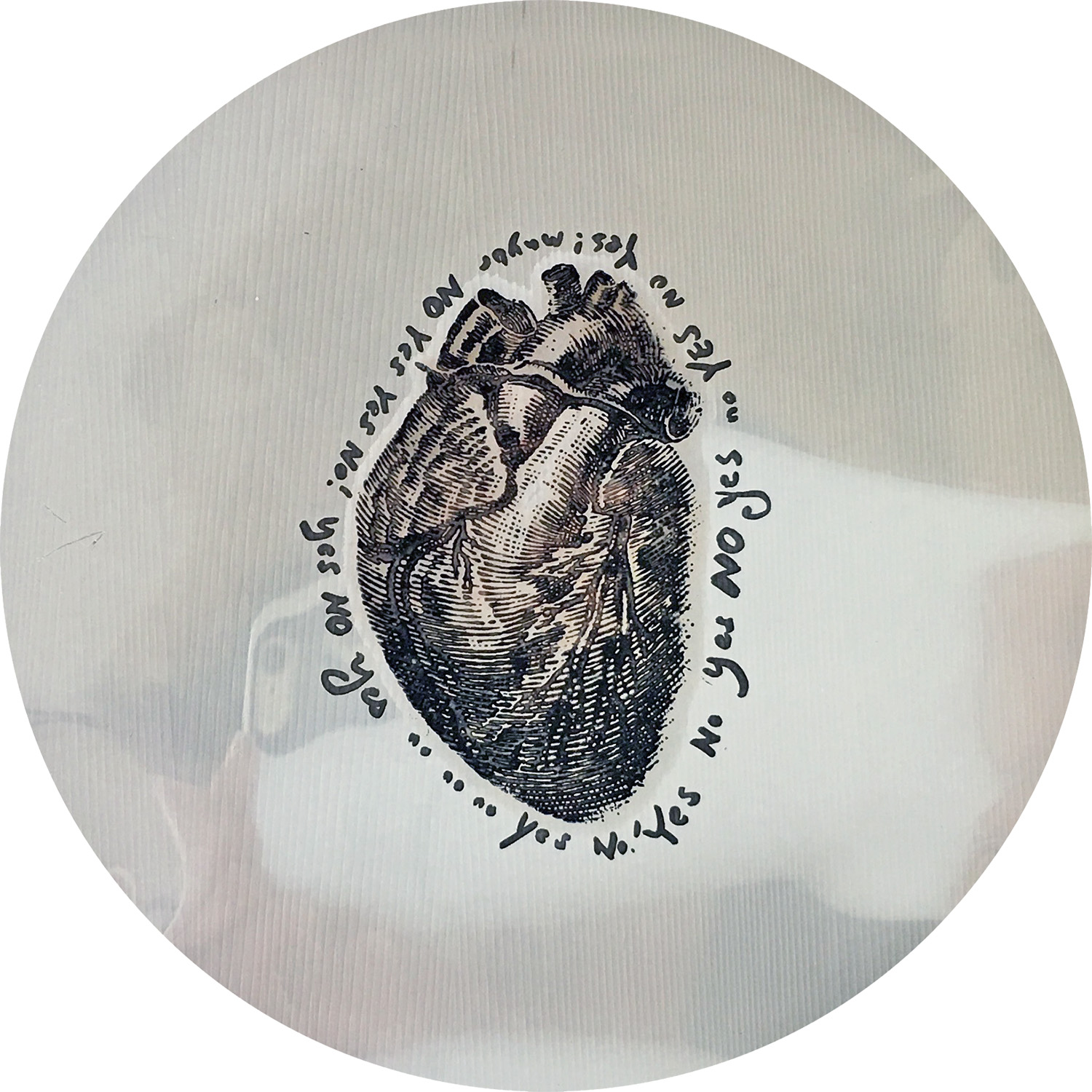 And further, I failed to predict my own incapacity to execute the exercise. A valentine to that extremely difficult person?  The truth is, I didn’t want to extend an olive branch to the objects of my difficulty. My attempts at the difficult valentines were ungainly and unsatisfying. They came home with me and sat on the kitchen table for a week. I had been to the post office twice but I left them behind.  Then I buried them in the garbage under a mound of coffee grounds and orange peels.  When I queried two other people who had attended the workshop they said the same thing: they hadn’t mailed theirs either. There’s a reason when the Buddhists do the Metta exercise, they do it in the safety of their homes, alone. Forgiveness is a solitary activity. It requires a great deal of wordless effort in the privacy of one’s own brain.

For my part the valentines I couldn’t mail kept rattling around in my head.  I began to think about my difficult persons, and what had caused offense, and what might have led them to certain behaviors that wounded me. And I noticed that my anger had grown tender and sore like a wound that had softened into a smallish bruise.  It began to seem possible, even likely, that I was not entirely free of blame.  I tried again at my dining room table and produced the most rudimentary offering–the kind I made in elementary school with red construction paper and glue stick hearts. Holding these foolish inadequate artifacts in my hand shook up small unwelcome waves of affection and generosity in me. After I mailed the envelopes, other waves ensued. 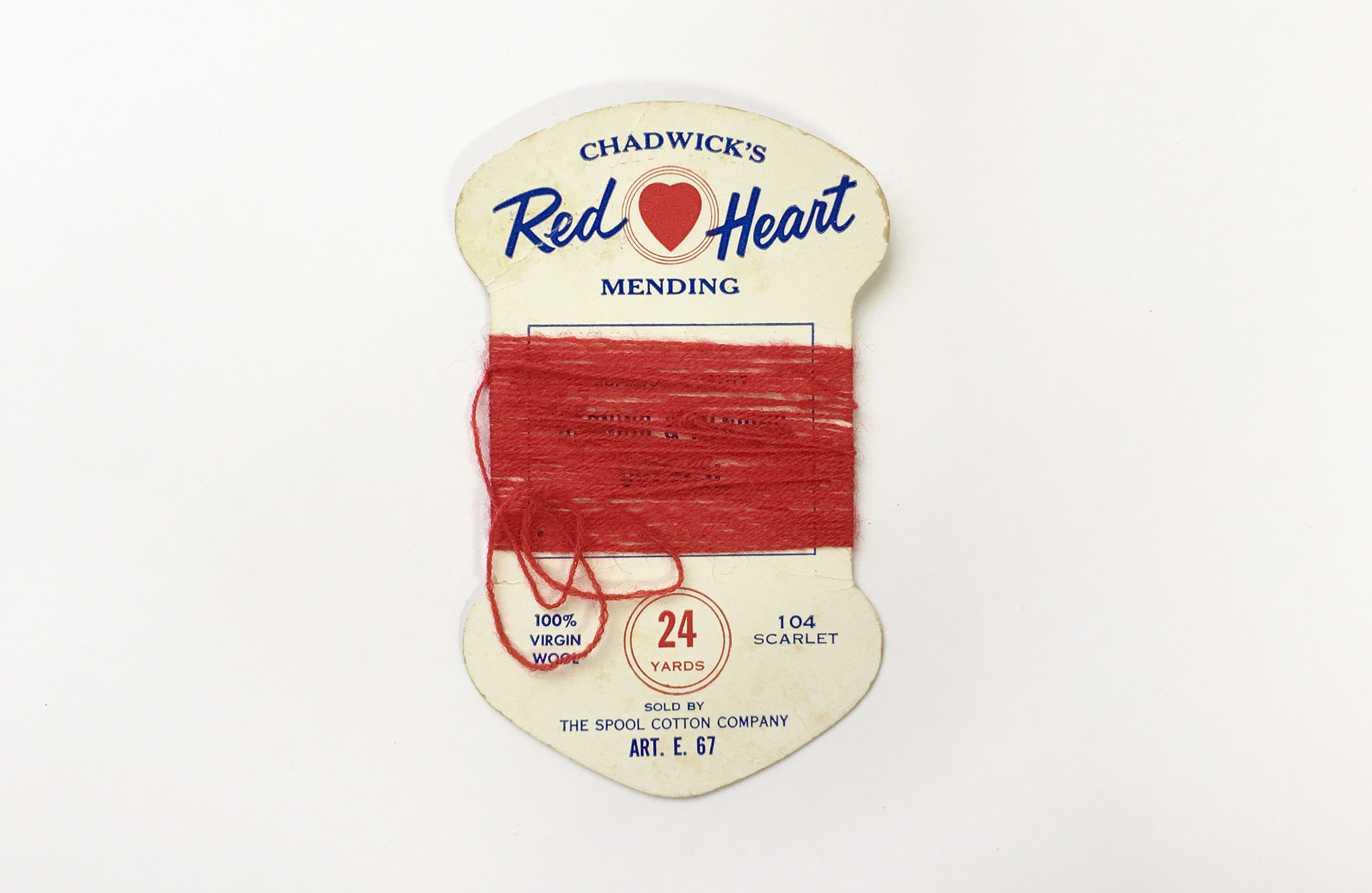 Above is a photograph of a valentine that emerged from our workshop, brought to the event by a kind, original, and incredibly handy friend who holds political views divergent from my own. I am trying to find a way to discuss politics with her, to reconcile differences in a friendship that matters to me.  And still, whatever made me think that life’s contradictions can be reconciled? She travels everywhere with power tools and collects scraps of things, intriguing sticks, ribbons, coins, rocks. Out came her bag of objects we might need: doilies, string, sealing wax. And a greying new old stock card of red sewing thread from the 1950s, never used.

I have shared only a very small partial list of our errors here at ArtYard. I have left out some choice ones to save them for another tale.  But there would be no art anywhere and certainly no ArtYard without these misadventures.  Most of the artists I know are dyslexic and had to fail their way out of a conventional education into an inventive life.  Creativity comes from an openness to failure, a willingness to risk embarrassment, an impulse to graft unlikely things together, and a desire to mend the broken state of things. 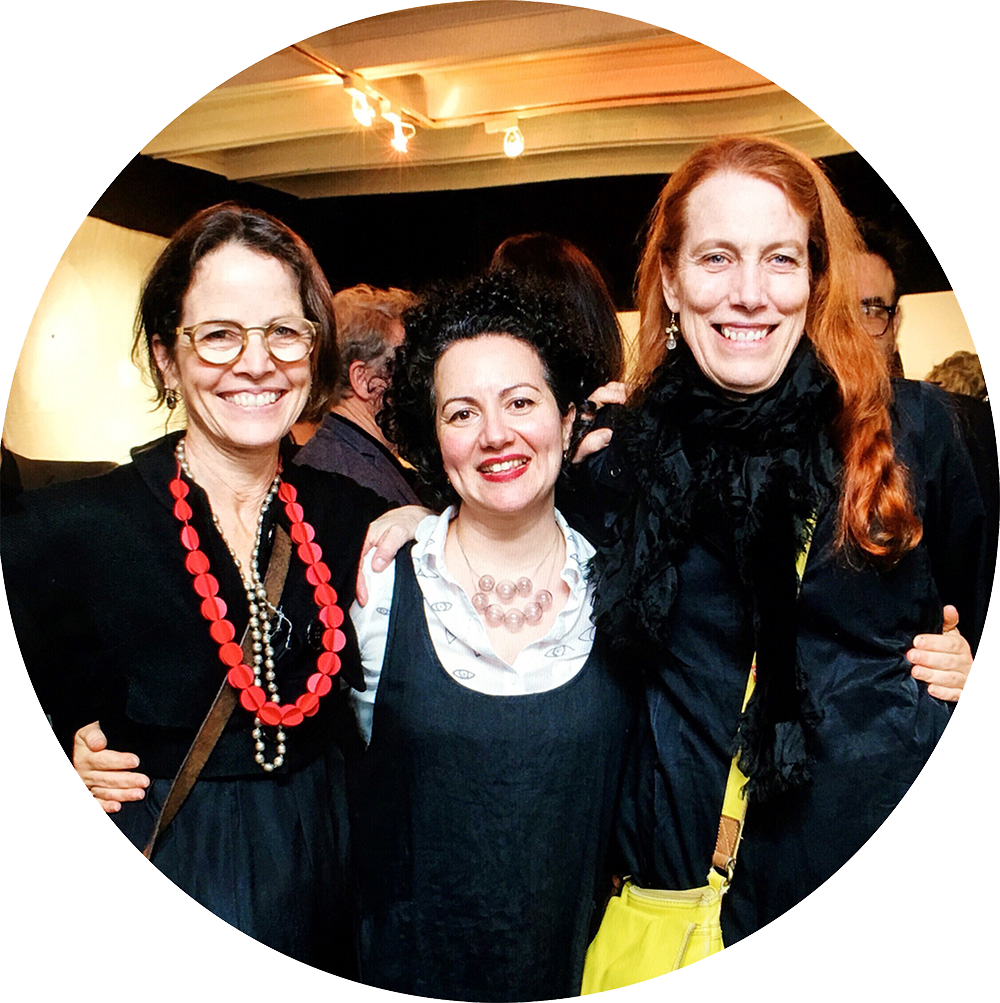